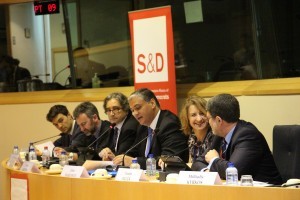 The CPMR Islands Commission gathered its 35ft General Assembly in Brussels at the European Parliament, on 25th June, at the invitation of Ricardo SERRÃO SANTOS (PT-S&D), Miltos KIRKOS (GR-S&D), Tonino PICULA (HR-S&D) and with the participation of Vasco CORDEIRO, President of the Government of the Azores and of the CPMR.

The event, co-financed and co-organised by the Socialist & Democrats Political Group, was opened by Cllr Steven HEDDLE, President of the Islands Commission and Convener of the Orkney Islands Council and  focused mainly on Cohesion, Energy and immigration issues.

During the Island Commission General Assembly, a special ceremony was devoted for the new signatories of the Pact of islands.