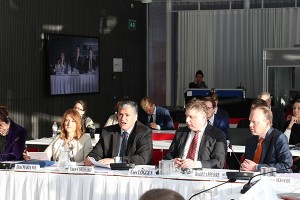 The Conference of Peripheral Maritime Regions (CPMR) gathered in Haarlem on 19th February 2016 for its Political Bureau, at the invitation of Cees Loggen, Regional Minister of Noord-Holland Province (NL). The event was opened by the President of the CPMR and of the Autonomous Government of the Azores (PT), Vasco Cordeiro, who recalled the audience that “The regional level is a powerful tool for the EU project and it has not been considered as such; we need to be considered as fully fledged partners”.

Eleni Marianou, Secretary General, outlined the milestones of the CPMR work programme encompassing not only its main policy work on Cohesion, Maritime Affairs, and Accessibility but also addressing emergency issues such as regional migration management, and the key role of regional authorities in global agendas.  In a context where the EU paradigm seems to be floundering, “our role as Regions is to implement efficiently, to innovate and invest. We need to develop the right narrative that avoids easy fixes and populism.”

The European Budget and the prospects of the future mid-term review were the focus point of the debate on Cohesion Policy. Pierre Karleskind, Vice-President, Regional Council of Brittany, raised the issue on what cohesion policy can do for some less accessible regions that do not fit eligibility criteria and cannot access specific cohesion funding instruments.

Jean Arthuis, Chair of the European Parliament Budget Committee, qualified the EU budget as a “tight corset”, and insisted that “We are at the end of a type of budget. We need effective and flexible instruments.” He recalled that “the peripheral maritime regions have to pitch their case to demonstrate that their projects have added value and contribute to an enhanced and dynamic growth and to tackling mass unemployment that affects the whole of the EU.” In the debate he clarified that the objective is “to develop the competitiveness of regions in Europe”.

With regard to maritime issues, the CPMR Political Bureau firstly addressed the implementation of its “maritime agenda” which notably includes an assessment of its Vasco da Gama initiative. The pilot project will hold its final conference in Brussels on 1st March.  The session was followed by a presentation of the Dutch Presidency’s priorities where the Regions could provide an effective contribution in the high level discussion groups, especially on topics such as short sea shipping. Lodewijk Abspoel, Senior Advisor North Sea Policy IMP and MSP, stressed that “land-sea interaction represents a key element” for an effective implementation of the Directive on Maritime Spatial Planning. In the debate, Cees Loggen highlighted, “There still are a number of challenges. For instance, the national MSP’s differ in content and priorities. They are also inconsistent in legal status. National targets and strategies are partly contrary.”

A round table on prospects for action in the field of transport, gathered several representatives of CPMR Geographical Commissions sharing a common willingness to pursue an active role in the TEN-T corridor forums. They are pushing for a better integration of the regions situated at the end of the corridors, including islands and outermost regions.

Rogier Van Der Sande, Regional Minister of Zuid-Holland and Vice-President of the CPMR in charge of Energy and Climate, recalled the CPMR’s participation in COP 21, where for the first time, the role of non-state actors was recognised giving even more urgent emphasis for the regional authorities to act.

Beatriz Yordi Aguirre, Head of Unit for Adaptation at DG Climate Action, highlighted that “Regions are facilitators to implementation both mitigation and adaption plans, and macroregions and transnational aspects are also very important”.

Preceding its Political Bureau, CPMR members participated the day before in a “High Level Conference: Obstacles to investment and access to finance in Europe for the maritime economy: what role for European regions?” which presented case studies of how regional and local authorities in Europe act as a leverage effect for growth, particularly in the maritime economy, thanks to support provided by the European Union,  and an adequate use of its financial instruments.