Regions are at the heart of European solutions 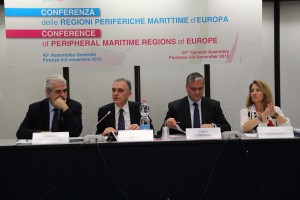 During the work, Eleni Marianou, Secretary General of the CPMR, recalled that today the European project has a multitude of challenges to address, but regions are at the heart of European solutions.

“Tackling the migration crisis is only one example: Regions too have a duty and a responsibility to ensure the integration of migrants and refugees in their respective territories although they are forced to manage a refugee crisis by using their own limited resources,” highlighted Vasco Cordeiro in his opening speech.

Christos Stylianides, the European Commissioner for humanitarian aid and crisis management, participated in the debates on Migration affirming that: “what we are facing is a global crisis which requires a global action. This is a matter of humanity and human dignity: countries that face refugees at their borders everyday need our strong support and people are escaping fear and terror need jobs and perspectives”

On this issue, the CPMR delegates voted a declaration calling for “a considerable increase of efforts and resources dedicated to the socio economic integration of migrants and a stronger participation of regions in the EU consultation and decisional process.”

Investment policies at European level should continue to exist in order to properly address growth and jobs for all European territories. The role of regions is fundamental to the future Cohesion and Maritime policies.

“I cannot imagine a post 2020 cohesion policy with a different governance or supporting only some regions. In this way, we would renounce any EU investments and competitiveness policy. I also hope that the national contribution of structural funds will be excluded from the EU Stability Pact rules,” declared Enrico Rossi.

“CPMR has always helped us devise better policies and I thank you for your support. Today, we share similar views and together we can drive sustainable blue growth forward, and I am counting on your support on ocean governance, coastal tourism, sustainable fisheries and aquaculture, biotechnologies and ocean resources,” stated the European Commissioner for Environment, Maritime Affairs and Fisheries, Karmenu Vella

The unquestionable affiliation between accessibility and economic development for all of Europe’s regions was also part of the debates. The CPMR feels that the connectivity gap between European territories could widen further and ultimately result in a more pronounced loss of attractiveness for those regions, which remain the most peripheral and difficult to access.

Ahead of COP 21, the CPMR regions recalled their will not to miss the opportunity to ask for a major role in tackling climate change as well as in climate change adaptation.

“Maritime regions are at the centre of the European industrial renaissance. For instance, the shipbuilding sector employs more than 500 thousand people with an annual average turnover of about 72 billion euro. This is a strategic sector that I strongly promoted with the LeaderSHIP 2020 strategy when I was European Commissioner,” affirmed the Vice-President of the European Parliament Antonio Tajani.

A final declaration was approved by the participants, numbering around 300 delegates including 35 regional leaders and 95 elected politicians.