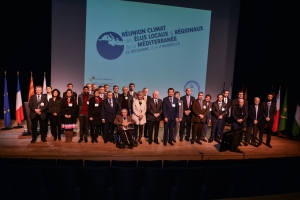 he Political Bureau of the Inter-Mediterranean Commission (IMC) met last 10th of December in Marseille (FR) at the invitation of its President, Michel Vauzelle, President of the Region Provence-Alpes-Côte d’Azur.

This last document takes into account the debates and conclusions of the Med Cooperation Days, reaffirming the will and the potential of Mediterranean Regions for the gradual set-up of such strategies, starting from a maritime integrated approach. This approach is also included in the new Action plan of the IMC together with the development of a Mediterranean of projects, strengthening the cooperation with partners in the South and the emergence of a Mediterranean citizenship. The IMC will also work through its renewed working groups on the most important fields and policies of interest for its regions, such as Territorial Cooperation, Transport, Integrated Maritime Policy, Energy, Water and Economic and Social Cohesion, among others.

The Declaration on Climate is a political document drawn up jointly with the Mediterranean Commission of UCLG and approved in the framework of an international meeting of local and regional elected official of the Mediterranean on Climate that was held, back to back, on 11th December in Marseille. This second event gathered more than 150 representatives of seventeen Mediterranean Countries to discuss the Climate Challenges for the basin and the territorial response and commitment, in order to positively contribute to a joint Mediterranean vision towards the COP 21 that will be held at the end of 2015 in Paris.

“We must champion the key role of regional and local authorities in tackling global warming in order to incite as many authorities as possible in the Mediterranean to adopt a more inclusive approach towards drawing up an ambitious and binding future international agreement that is consistent with the increasingly pressing alerts from the scientific community. Among the multitude of actions possible, regional and local authorities should continue their commitments towards greening and energy transition by developing renewable energies, building eco-districts, structuring the waste treatment and recovery sectors as well as improving the sustainable development of water resources,” said Michel Vauzelle during his speech.

Moreover, the President of the Region Provence-Alpes-Cotes d’Azur announced that a further high level event – the “MEDCOP 21” will be organised on 4-5th June 2015 in Marseille in cooperation with the French Presidency and different key players of the basin, in order to contribute to a true positive agenda on Climate at the Mediterranean level.

Back to back with the Political Bureau and this Climate seminar, a third event on Blue Energies in the Mediterranean, was also held in Marseille and organised under the umbrella of the COM&CAP MarInA-Med project, one of the most strategic actions involving the Inter-Mediterranean Commission.