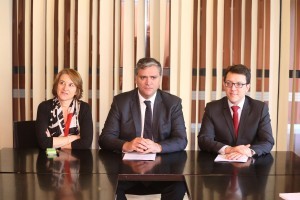 The Conference of Peripheral Maritime Regions (CPMR) met for its Political Bureau on 27 February 2015 in Nantes (FR) at the invitation of Jacques Auxiette, President of the Regional Council of Pays de la Loire.

The discussions focused on cohesion, maritime affairs, accessibility and other policy areas, but particular attention was given to the implementation of the Juncker Plan and the role of the regions. The CPMR welcomes the European Commission’s ambition and its proactive approach to reversing the downward trend of investments with the Juncker Plan, but it was questioning a number of points regarding the Plan and how it will be implemented.

“The Juncker plan might not reach out to regions, which do not have an extensive experience with these instruments and lack the relevant structures to tap into the European Strategic Investment Fund. We represent peripheral regions that may not have the capacity to compete for investments under the Junker Plan and we all know how important that is for their future economic development,” stated Vasco Cordeiro, President of the CPMR and President of the Government of the Azores during his opening speech.

More specifically on cohesion, Jacques Auxiette declared that, “Europe within our territories is also about structural funds. Today, EU policies are translated into practice in line with the realities on the ground, with the Regions now being responsible in France for managing EU funds. This is a major step forward in terms of efficiency, allowing for a better match between EU-led policies and the specific features and strengths of each Region. So rather than talking about managing funds, I prefer to talk about delivering EU policies in the territories.”

Marietta Karamanli, Vice-President of the European Affairs Committee at the French National Assembly also participated in the debates underlining that, “Territorial cohesion has become a goal in itself in Europe, but projects and industries developed by a network such as yours can be supported by a fund that would stimulate private investment by participating in risk-taking, investing in the markets and helping to cover risks. Public investment also needs to be boosted by a fund financed in the form of a Member State subsidy with the capital broken down into direct capital, unused structural funds and capital committed in the form of allocated tax revenue to be repaid over a given period.”

On maritime issues, the CPMR delegates insisted on pursuing the links between the maritime and marine research dimension of the Juncker Plan, of Structural Funds and any other policy or funding opportunity. Particularly, they decided to introduce a platform for maritime Regions and socio-economic stakeholders (from industry and the research and innovation sectors) to discuss maritime investments linked to regional smart specialisation strategies and the European funds.

“I share the ambitions of the Juncker plan to revive investment in Europe. Return to growth will require restored confidence in industry and in particular in maritime industries. We do not know the criteria of the plan, the size of projects, the level of risk. We must take risks, and that’s the gamble that we have taken in Pays de la Loire in order to support major infrastructure projects and innovation dynamics that strengthen our businesses,” declared Christophe Clergeau, First Vice-President of the Regional Council of Pays de la Loire.

During the meeting, the CPMR also decided to launch a campaign in favour of accessibility as CPMR representatives are well aware that there is unquestionably a relationship between accessibility and the economic development of Regions and also that accessibility is insufficiently taken into account in the TEN-T and CEF maps.

Isabelle Thomas and Ricardo Serrão Santos, both Members of the Seas, Rivers, Islands and Coastal Areas Intergroup at the European Parliament, and Rachel Lancry Beaumont, Deputy Head of Unit at the European Commission (DG REGIO) attended the Political Bureau representing the EU institutions.

At the end of the Political Bureau, the CPMR delegates condemned the terrible terrorist attacks against Charlie Hebdo in Paris, Krudttønden cafe and the Krystalgade Great Synagogue in Copenhagen and urged the European Union as well as the Member States to take the necessary measures against radicalism, fundamentalism and anti-Semitism as well as any form of extremism.