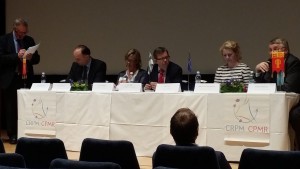 Last week, on 7 May 2015, the General Assembly of the CPMR Baltic Sea Commission took place in Vaasa, in the Region of Ostrobothnia, Finland.

During our General Assembly, a Work Plan for the year to come was adopted and the organisation has now launched a strategic bottom–up process that will include all Member Regions, Working Groups and other stakeholders in the Baltic Sea area in order to express the vision, strategic approach and relevant and effective actions of the organisation.

For the time being, the Baltic Sea Commission has three Working Groups. In parallel with the strategic process during the year, the Working Group on Maritime issues will have a strong focus on maritime industries, in connection with the CPMR activities in this field (Maritime Industries for Blue Growth initiative). Special interest will focus on issues related to sustainability and environmental innovation issues. The Transport Working Group will support and work with the CPMR Accessibility Campaign in order to put accessibility back at the centre of the EU and EUSBSR’s Transport Agenda.

In the Baltic Sea territory, the Bothnian Corridor is not part of any of the Core Network Corridors but it is connected to both the Scandinavian-Mediterranean and the North Sea – Baltic Corridor. Oslo–Stockholm was part of the European priority project “Nordic Triangle” but is now not part of any Core Network Corridor. The Baltic Sea Commission will work to ensure that the Bothnian Corridor, the Iron Ore Line and Oslo–Stockholm are seriously considered in the discussions to develop the Scandinavian-Mediterranean and North Sea-Baltic Sea Core Network Corridors. Well-functioning interconnections, also in an East-West direction, between the Core Network Corridors throughout the Baltic Sea Region should be highlighted. This benefits cohesive growth for all CPMR BSC Members that are not situated along the corridors and provides incentives for attracting new Members from countries on the southern and eastern shores of the Baltic Sea. The BSC Transport Working Group will also follow the implementation of the Sulphur Directive and meet the consequences with policy actions if needed.

The whole meeting functioned as the launch of the Energy Working Group and Ostrobothnia had arranged both a study visit to the largest Nordic Energy Cluster and a high-level seminar with Mr Markku Markkula on the Energy Union and the political role of Regional Authorities in the on-going and soon to be launched processes around energy.

“The discussions and decisions made during the General Assembly provide good ground for the organisation to grow stronger both in terms of members and in terms of impact”, President Jari Sainio said in his conclusion remarks. “At the next General Assembly we will not only celebrate the 20th anniversary of the organisation but we will also have a worked through vision and strategic framework to rely on for the future.”