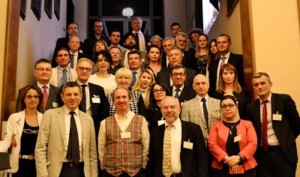 The AI-NURECC Initiative’s activities and actions were presented at the General Assembly of the Uniadrion Association, held in Bologna, Italy, on 21-22 May.

During the meeting the members discussed  future projects for the development of the Adriatic-Ionian area. Regarding the AI-NURECC presentation, special focus was given to the first EUSAIR Summer School, which will take place in Ancona, Italy, in September.

The Uniadrion Association grew considerably this year. Eight universities have been accepted to join the Association, bringing the total number of members to almost 40.

The AI-NURECC Initiative supports the implementation of the EU Strategy for the Adriatic and Ionian Sea Region (EUSAIR), promoting stronger cooperation among regional & local authorities, universities, chambers of commerce, youth associations and networks, entrepreneurs and civil society. Our aim is to support growth and prosperity in the Adriatic and Ionian region.