The Atlantic Arc Commission (AAC) working groups will meet before the end of the year to implement the strategy defined by the new Presidency in June.

As a result, priority will be given to the development of projects and setting out clear plans for concrete action. In order to launch this process and pave the way for the next two years, AAC meetings are currently being organised. 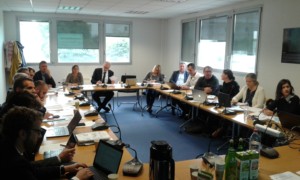 The AAC Fisheries and Aquaculture working group was the first to meet on 7 October in Nantes, at the initiative of Christophe Priou, Regional Councillor of the Pays de la Loire Region and Chair of this group.

Christophe Priou presented the group’s action plan for 2016-2017 to the members and stakeholders. Other important topics were discussed, including the consequences of BREXIT on the fisheries sector, the necessity to establish multiannual total allowable catches (TACs) and quotas, the future of the Common Fisheries Policy (CFP), and the post-2020 European Maritime and Fisheries Fund (EMFF).

The Innovation working group, chaired by the Nouvelle Aquitaine Region, met on 3 November, during the CPMR General Assembly in the Azores.

During this meeting, Laurence Harribey, Regional Councillor of the Nouvelle Aquitaine Region and Chair of this group, explained that the group is currently focusing on blue biotechnologies and aims at developing projects to foster this sector in the Atlantic area. Members discussed other priorities for the group, such as land-sea interaction, coastal monitoring and the preservation of the marine and coastal environment. They also explored the possibility of creating a task force dedicated to these topics within the Innovation working group.

The Marine Renewable Energy working group, which is chaired by the Brittany Region, will meet on 1 December in Brussels, during the meeting of the CPMR Maritime Industries working group. Members plan to discuss their involvement in the Technology and Innovation Platform for ocean energy (ETIP Ocean), coordinated by Ocean Energy Europe, and the AAC’s participation in EU projects related to marine renewable energies.

Finally, the Transport working group, which is chaired by the Cantabria Region, will meet on 8 December in Brussels. Discussions will mainly focus on the preparation of lobbying actions ahead of the revision of the Trans-European Transport Networks (TEN-T) regulation as well as on the Connecting Europe Facility (CEF) calls to reinforce the Atlantic TEN-T Corridor.