As full partner of the InnoBlueGrowth project, the IMC-CPMR follows with great interest the evolution of thematic projects oriented towards innovation and, in this framework, aims to take an active role in the capitalisation and communication activities regarding the outcomes of initiatives designed to foster innovation and growth in the Blue Economy sectors in Europe, such as the MISTRAL project.  As associated partner of the latter, the IMC-CPMR focuses on the backing of the project realisations and the dissemination of its results towards the wider audience and policy stakeholders. To this end, it had the honour to attend two Blue events – the Big MED Forum and the European Maritime Day – organised in Portugal on the 15th-16th of May to discover and discuss the contempt of MISTRAL’s first paramount achievement: the MISTRAL Blue Book.

These events were important since they presented the opportunity for the IMC-CPMR to keep strengthening the links between the regional and supranational governance levels thanks to the knowledge and propositions emanating from the local and regional levels, notably through projects such as MISTRAL. Hence, the presentation of the MISTRAL Blue Book at the Big MED Forum in Sines on May 15th was an occasion not to miss.

Delivering an in-depth benchmarking analysis of the 5 sectors of the Blue Economy by region and an identification of synergies and conflicts amongst sectors for each region, the MISTRAL Blue Book represents a key tool to be further disseminated and exploited to ensure the representation of local and regional issues before multi-level governance levels. 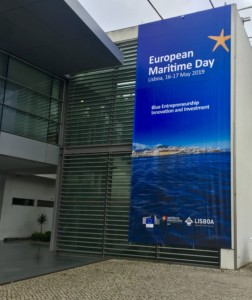 In addition, the IMC-CPMR’s participation in Portugal also involved a direct representation dimension. At the European Maritime Day, the major yearly event of the European Blue community held in Lisbon on May 16-17, the IMC-CPMR attended the workshops and networking discussions with the aim to make the regional dimension of European policy-making more visible, while the MISTRAL Blue Book was also presented to the wider audience at this event. In this respect, in accordance with the opening statement of Karmenu Vella, EU Commissionner for the Environment, Maritime Affairs and Fisheries (DG MARE), whom emphasized the need for a holistic approach to the Blue Economy based on an integrated and realistic vision of key interactions between inland and maritime human activities, the IMC-CPMR has been holding an important role of junction between the projects which collect data from local and regional sectors and policy-makers at EU level who aim at making policies more suited to the various environments of the EU such as the blue economy.

The strengthening of CPMR’s role being strongly correlated with the evolution and fruitfulness of all its related projects such as InnoBlueGrowth and MISTRAL, showing support for the latter during Blue Growth and European events was of primary importance for the pursuit of common regional goals.

Lastly, taking advantage of the numerous stakeholders represented in both events, the IMC-CPMR also promoted the upcoming Blue Growth Community Summer School taking place in Kotor, on 1st-5th  of July, another important event on the Blue Growth agenda for this year.