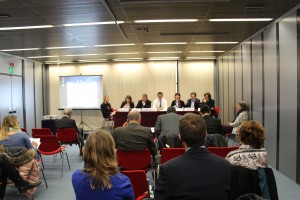 The CPMR Task Force on the Adriatic Ionian Strategy took place in Florence on 5th November 2015 in the framework of the CPMR General Assembly.

The meeting led to an exchange of experiences in the implementation of the projects in this area, bringing to light obvious difficulties encountered and the future actions to consider for better use of funds for quick and effective development of this area.

After the discussions, delegates elected unanimously Greta BARDELI as Chairman of this CPMR Task force.