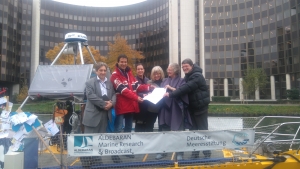 The European Parliament’s Seas, Rivers, Islands and Coastal Areas Intergroup (www.searica.eu) organised a conference entitled “The maritime perspective of Climate change” with the support of the Conference of Peripheral Maritime Regions (secretariat of the Intergroup). This event took place in European Parliament during its Strasbourg session on October 29.

It was an excellent opportunity for the members to discuss the importance of including seas and oceans in the climate negotiations in the context of the COP21 in Paris. The Members of the Intergroup discussed with Prof. Dr. Latif from Helmholtz Center for Ocean Research, Dr. Chu from European Marine Board and the Surfrider Foundation.

“Our oceans are of crucial importance for the global climate. But neither water nor climate knows the meaning of borders. If we want to change course we have to work together – globally. And with its experience in integrated maritime policy the EU should be a forerunner, in particular to strengthen a sustainable blue economy” said Mrs. Meissner, chair of the Intergroup.

Prof. Dr. Latif stated that “Climate Change is accelerating and we must act now. What is needed is a global energy transformation, a de-carbonisation of the world economy during this century. We should rapidly abandon fossil fuels and invest more in renewable energies”.

On October 28, the Intergroup also welcomed the Aldebaran research ship in Strasbourg, on its way to the COP 21 in Paris. At this occasion MEPs Gesine Meissner (Germany), Tonino Picula (Croatia), Sofia Ribeiro (Portugal), Ulrike Rodust (Germany) and Ricardo Serrão Santos (Portugal) officially launched the Call of the Intergroup “Oceans for Climate” by proceeding to a symbolic handover of the call to the crew of the Aldebaran ship. In the coming weeks the members of the intergroup will disseminate this call to their national government and the European Commission.