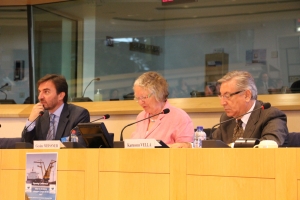 The European Parliament’s Seas, Rivers, Islands and Coastal Areas Intergroup (SEARICA) gathered in Brussels on 12 May 2015 for its first kick-off meeting in the presence of its chair Gesine Meissner, the Commissioner for Environment and Maritime Affairs, Karmenu Vella, and the Vice President of CPMR and Regional Councillor of Crete (GR), George Alexakis.

This Kick-off meeting focused on “Seizing the opportunity to develop a stronger Europe of the sea” and was divided into three thematic sessions, notably “Towards a sustainable Blue Growth”, “EU Funds in support of maritime activities”, and “Tackling the challenges of the Islands”.

“I have an ambitious programme in support of sustainable blue growth and I am asking for your support to deliver that. I see the intergroup as the place where we can discuss new ideas, freely and early on. Your wide-ranging experience and your direct link to citizens will help us make better policies. And you are the ones who can really mainstream the blue growth agenda in all relevant committees within the EP,” stated Karmenu Vella, welcoming the setting up of the Intergroup and showing his will to coordinate actions through a “true inter-institutional dialogue”.

Maritime Regions have already shown their commitment to invest in the maritime economy, but they will keep working in synergy with the European Parliament and the European Commission for a stronger Europe of the Sea.

In this context, in the opening session, George Alexakis focused on different aspects of the blue economy and recalled that “maritime regions are the natural partners for the implementation of the Maritime Spatial Planning Directive and the Marine Strategy Framework Directive”. “Maritime industries provide a large share of jobs where they are located, so maritime regions are the place where ships and structures for marine renewable energies are built,” added the Vice President of the CPMR and Regional Councillor of Crete after have called for “full inclusion in the blue growth approach” of fisheries since “it provides sustainable jobs to many people in our regions”

Charalampos Kokkinos, Deputy Regional Governor of South Aegean, (GR) represented the CPMR Islands Commission during the discussions. “We are concerned though islands often representing higher investment risks, might fail to attract the anticipated private funding and therefore might eventually not benefit from the investment Juncker Plan”. He declared.