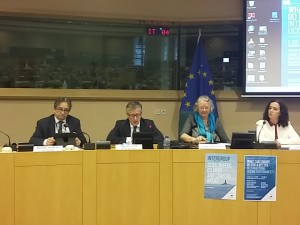 The Seas, Islands, Rivers and Coastal Areas Intergroup of the European Parliament met on 2 December for its conference on the follow-up to the consultation on International Ocean Governance launched by the Directorate-General for Maritime Affairs and Fisheries. This conference provided the opportunity for participants to exchange views on the role the EU and global maritime actors should play to ensure good international governance. It was attended by Gesine Meissner, Chair of the Interngroup, Sofia Ribeiro, Ricardo Serrão Santos and Ulrike Rodust all three Vice-Presidents of the Intergroup.

The European Commission, represented by Joao Aguiar Machado, Director General of DG MARE, explained that it should be in a position to present an analysis of the consultation by the end of 2015, and Mr Machado gave an outline of the main trends. He explained that the issue of strengthening the regional approach to international ocean governance through Conventions within Regional Seas had been raised by a large number of actors. He also underlined the need to develop effective governance so as “not to repeat at sea the same mistakes we have made on land.”

During the discussions, the conference of Peripheral Maritime Regions (CPMR) was represented by Manual Ara Oliveira, Deputy Director for Spatial Planning and Environment of Madeira (PT). In October, the CPMR had already presented its contribution to the Commission’s consultation. On this occasion, it stressed the key role of maritime and island Regions in implementing all international maritime decisions and the need to include them in the governance processes.

The future Dutch Presidency of the EU was represented by Donné Slangen, and the European Network of Maritime Clusters by its President, Francis Vallat.

All presentations may be consulted on the Intergroup website www.searica.eu