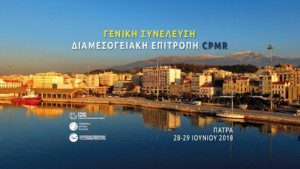 Several Mediterranean regions gathered in Patras, Greece, to discuss the most pressing challenges for the present and future years at EU and basin level. During the meeting, a new Political Bureau was elected for the period 2018-2020, further political messages where approved focusing on the future of Territorial Cooperation in the Mediterranean, Sustainable Tourism and several sectoral policies concerning the regions, including the support to many concrete actions and projects. 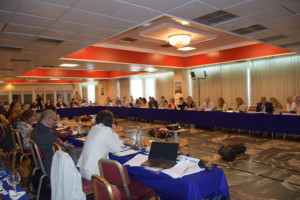 Patras, June 28-29, 2018. The Members of the Intermediterranean Commission (IMC) of the Conference of Peripheral Maritime Regions met for their General Assembly to elect their new President, the new Political Bureau and approved key strategic policy documents, among which the General Assembly’s Final Declaration, which concerns all the policy areas of interest for its members, the IMC-CPMR Position on the future of the Territorial Cooperation in the Mediterranean, and its Political Agenda to support Sustainable Tourism in the basin.

This year the meeting brought together about 24 regional government representatives from Greece, Italy, Spain, France, Albania and Morocco, which is more than the half of the global membership of the IMC, who renewed their trust in favor of M. Apostolos Katsifaras for a new mandate as the President of the IMC over 2018-2020. M. Katsifaras, Regional Governor of Dytiki Ellada (Western Greece), after presenting the results of the mandate 2016-2018, expressed his vision for the upcoming IMC mandate, so as to support blue growth and emerging strategies in the Mediterranean via the joint works of IMC regions (statement).

President Katsifaras said: “I’m very thankful for the trust I was given once more by our Mediterranean regions and I’ll do my 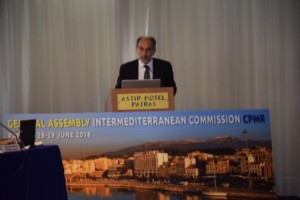 best to honor this important commitment and responsibility. Our work during the past mandate was very fruitful and had a positive impact on our territories, regions and citizens. We all now need to go further and raise also our voices in favor of a more solidary and effective European project, which should avoid any type of discrimination and promote a solid framework of cooperation with the non-EU Mediterranean territories”.

The newly re-elected President also insisted more specifically on the role Regional governments should have with regards to migration “whether it be in terms of actions on the field or during decision and policy-making processes regarding migration management, reception and integration or in concrete cooperation actions, as they are already demonstrating”. He also added “I strongly support the idea of reinforcing the Mediterranean cooperation between regions from the Mediterranean, and in particular from the EU and Northern Africa, as the president of the Region of Valencia recently proposed following up the encounter with the International Organization for Migration. He can count on our organization – which involves already members from all coastal EU and some IPA countries plus Tunisia and Morocco, and on a very solid partnership with non-EU Mediterranean actors – to work together on how to strengthen our cultural and socio-economic bonds”. 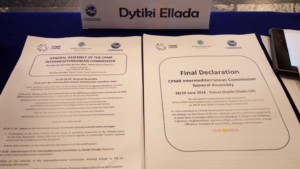 Accordingly, the IMC Final Declaration – ratified unanimously by the members – notably focuses on the future of the European Union and the forthcoming multi-annual financial framework putting forward the Mediterranean point of view in several policy areas (on global issues such as Migration, Climate or Neighborhood, as well as on sectoral policies connected to territorial cooperation, emerging strategies, multilevel governance, blue growth, environment, transport, water, energy efficiency, economic and social cohesion etc.). Migration and Asylum have been among IMC’s first concerns, and given the latest news with the Aquarius and Lifeline boats, were recognized as challenges needing to be dealt with in a “cross cutting and multilevel approaches […]. [Migration and Asylum] must [also] be considered a matter of rule of law and effective coordinated policies, not politics.” Through this Declaration, the IMC is therefore making concrete proposals and hoping for an improved impetus and solidarity from the European Council negotiations to support migration challenges and the role of the regions.

With this in mind, IMC regions’ representatives underlined again the need for an enhanced cooperation in the Mediterranean, through concrete and strategic projects based on strong partnerships. The IMC has indeed been collaborating – in projects and policy relevant initiatives – with hundreds of key stakeholders as well as with Institutions and networks like the Union for the Mediterranean, ARLEM, MedCities, Arco Latino, UNIMED, Euro-Regions, UNEP MAP etc. and intends to keep doing in the future. Some of these organizations took part in the IMC General Assembly animating the debate and offering the opportunities to strengthen the synergies for instance in relation with UfM works on Blue Economy and Environment, the West MED maritime Initiative, BLUEMED or the Mediterranean Strategy for Sustainable Development (MSSD). 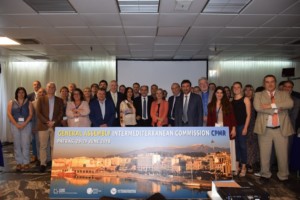 EU Cohesion Policy as well as important cooperation instruments such as European Territorial Cooperation (ETC) were subject of animated discussions among IMC Members, which highlighted the need for ETC to be supported and improved – according to regions’ needs – in the EU budget and in connection with sectoral policies and emerging initiatives and strategies, since they have a consequent impact on regional development. The added value of cross border maritime cooperation was particularly stressed, based on the results of the current programming period and strong recommendations where approved by IMC members towards EU institutions, including 3 “food for thoughts” scenarios concerning the future geography of programmes in the Mediterranean, based on a feasibility scale criterion. 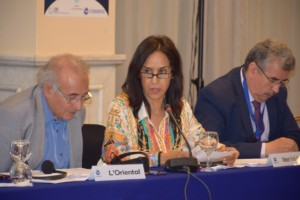 Agnes Rampal, Regional Councillor the Région Sud Provence-Alpes-Cotes d’Azur stressed the possible issues concerning the new EC’s regulation proposal on ETC and the need to promote a new pilot experimental programme to support the implementation of the West MED maritime initiative. George Alexakis, Vice-President of the CPMR for maritime affairs and Vice Governor of Crete, as well as the political representatives of the Regions of L’Oriental, Tayeb Masbahi and Rabat-Salé-Kenitra, Aouatif Derrous and Mohamed Sadiki, stressed the importance to reinforce in an inclusive way the dynamics of cooperation at wider Mediterranean level, including non-EU Med countries and in particular on maritime issues, as Blue 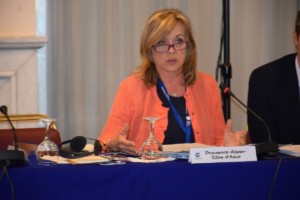 Growth present wonderful opportunities. Catalonia, Andalusia and Valencia representatives enlightened the added value and the need to foster both existing Interreg MED and ENI CBC MED programmes in the post 2020 period, reinforcing the participation of southern countries and the co-ownership. Emilia Romagna insisted on the relevance of ADRION for EUSAIR as on the questions marks regarding the definition of future programmes in the Adriatic-Ionian area according to the new EC proposal, in order to avoid overlapping and finding the right governance set up, from the management and steering point of view. 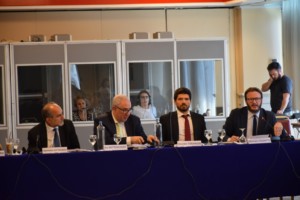 Representatives from some of the most relevant cooperation programmes in the Mediterranean – Interreg MED, ENI CBC MED, ADRION, MARITTIMO – took also part in the debate on capitalization towards a better multilevel dialogue and governance in the Mediterranean that was organized together with PANORAMED making the discussion and cooperation further advance towards more concrete synergies for the present and future programming periods, with a focus on maritime issues. 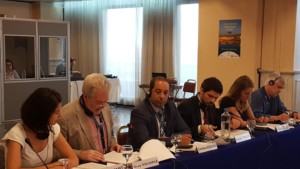 funds (Interreg, ESF, etc.) were used efficiently generating a real positive impact on social inclusion, the citizens, territorial stakeholders and in particular regarding youth and employment. The debate was promoted in the frame of a EU project “Spotlight on Cohesion: Europe’s regions at the forefront” and involved several beneficiaries of Cohesion policy, including the University of Patras and others from the civil society.

Lastly, A. Katsifaras, together with Councillor Guy Esclopé from Occitanie expressed the will of the IMC to deepen its works on economic and social cohesion, notably regarding Social and Solidarity Economy, and Youth integration into the labor market. This wish came timely as the IMC Working Group on Economic and Social Cohesion also met during these two days for its yearly update. Coordinated by the Occitanie and Campania regions, the focus was the state-of-the-art regarding social and solidarity economy, as well as the presentation of regional works on youth, mobility and employment. 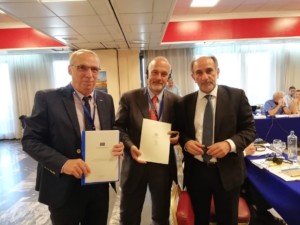 The meeting was also a wonderful opportunity for the Bologna Charter on the sustainable development of coastal areas in the Mediterranean to widen its network, welcoming a new direct signatory region: Attica.

The IMC will meet again for projects and working group activities during the next months, as well as for its Plenary in Madeira next 18/10/2018 in the framework of the General Assembly of the CPMR.

List of press releases and articles published on the event here below:

Pdf with links to the 138 press articles published during and after the meetings on the press and many Greek media.