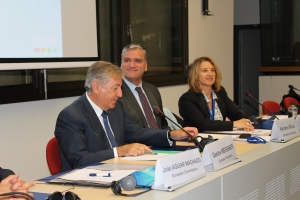 The event allowed maritime regions from across the EU to explain how they plan to use EU funds, – particularly European Funds for Strategic Investments (EFSI, and in particular ERDF, EMFF and ESF – to boost jobs and growth in the maritime sectors.

The Conference was opened by Karmenu Vella, Commissioner for the Environment, Maritime Affairs and Fisheries, who underlined that “EU coastal regions could spend almost 7 billion euros from just two EU funds – the European Regional Development Fund and the European Maritime and Fisheries Fund. Under a more optimistic scenario the figure could be nearly 10 billion euros. And this does not take into account other possible sources of funding, such as President Juncker’s 300+ billion euro European Fund for Strategic Investments or the Horizon 2020 programme worth 79 billion euros until 2020”.

Vasco Cordeiro, President of the CPMR and the Regional Government of the Azores (PT), shared the same line calling for more “synergies” between EU funds. Indeed, the CPMR has always been an advocate of such an approach that allows maximising efforts using existing instruments and funds. “To take a concrete example, Horizon 2020 Blue Growth calls for proposal for 2016 and 2017 will focus on areas such as specialised vessels concepts, technologies for the multi-use of the ocean’s marine space, and other maritime technologies,” stated President Cordeiro.

Furthermore, according to the CPMR President, “Smart-specialisation strategies are not just a list of top-down maritime priorities. On the contrary, they mirror how the maritime economy actually develops on the ground.  For this reason, such strategies seem to be the right tool to ensure that EU funds are used in a way that actually corresponds to the reality of blue growth in coastal régions.”

Solutions to deliver blue growth will come from continuous dialogue between regions, EU institutions and maritime stakeholders. With this in mind, different representatives from across the field attended the Conference, as well as Gesine Meissner, Chair of the EP Intergroup “Seas, Islands, Rivers and Coastal Areas and Eleni Marianou, Secretary General of the CPMR.

The CPMR will continue working on this issue and will participate in a workshop on blue growth and smart specialisation which will take place in the Canary Islands on 8-9 October 2015. After this, the CPMR General Assembly (Florence, 4-6 November 2015) will provide an occasion to present and discuss new initiatives to be undertaken at both European and sea-basin levels with CPMR Geographical Commissions.