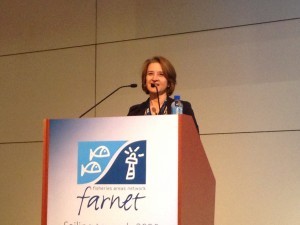 During the 2007-2014 period, Axis 4 of the (EFF) was the main instrument for the sustainable development of fisheries areas. Implemented by 312 Fisheries Local Action Groups (FLAGs), Axis 4 has supported over 9 000 projects at the local level, applying a bottom-up, local development approach in fisheries and coastal areas across 21 Member States.

The Directorate General for Maritime Affairs and Fisheries (DG MARE) of the European Commission, with the assistance of the FARNET, organised a high level conference on the results of Axis 4 and the future of Community-Led Local Development (CLLD) in coastal communities.

This conference took in Brussels on the 2nd and 3rd March 2015 and considered the new opportunities presented by a better integration of coastal communities in the development of their territories, working in partnership with other actors, and in synergy with other funding opportunities.

During the conference, the CPMR was represented by its Secretary General, Eleni Marianou, who took part in the opening session together with Karmenu Vella, Commissioner for Environment, Maritime Affairs and Fisheries, Renata Briano, Vice-Chair of the Committee on Fisheries at the European Parliament and Normunds Riekstins, Director General of Fisheries, representing the Latvian Presidency of the Council.

The CPMR Secretary General firmly supported the introduction of a multi-level and multi actor governance that allows Regional authorities to play a key role in the conception as well as the implementation of the Common Fisheries Policy (CFP).