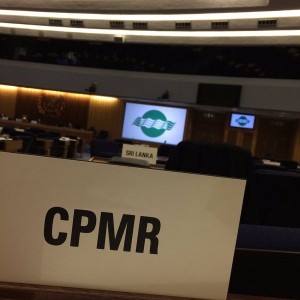 The CPMR has taken a leading role in discussions at international and European level about compensation for ecological damage to marine waters.

At international level, in April CPMR took part in the discussions of the International Oil Pollution Compensation Funds (IOPC) governing bodies, where it has observer status. Draft IOPC guidelines on ecological damage were discussed during the meetings.

Pierre Karleskind, Vice-President of the Brittany Regions, representing the CPMR, advised that a voluntary supplementary fund should be established that is dedicated to environmental damage within the IOPC Funds.

CPMR will continue to stress the importance of the supplementary fund as discussions on the IOPC draft guidelines for ecological damage proceed in 2016.

In parallel with international discussions, compensation for ecological damage to marine waters has also been discussed at European level, via the review of the European Liability Directive (ELD).

A report published in April 2016 about the ELD Directive states that the European Commission will consider the further exploration of whether different remediation standards can be addressed by non-legislative means, in particular by working towards a common understanding of concepts.

An example of this is through interpretation within the ‘Claims Manual’ of the IOPC Funds and/or within fora composed of the Parties to the Conventions.

The Commission also indicated that any possible further action may be taken on the basis of the report and the comments from the European Institutions, ELD stakeholders and following a public consultation process. CPMR will continue to participate in this process.