CPMR to provide maritime expertise to EU and Maltese Presidency 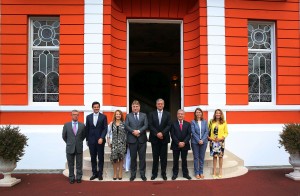 CPMR delegates meet with European Commissioner for the Environment, Maritime Affairs and Fisheries, Karmenu Vella, in the Azores

CPMR Regions plan to help the European Commission and the future Maltese Presidency to the EU develop a series of initiatives to support the maritime agenda.

At a meeting in the Azores with the European Commissioner for Environment, Maritime Affairs and Fisheries, Karmenu Vella, and Daniela Sabino, of the Maltese Ministry for Gozo, a CPMR delegation was led by Vasco Cordeiro, President of the CPMR and the Government of the Autonomous Region of the Azores.

Also in attendance were Cees Loggen, Regional Minister of Noord–Holland Province, who advised Commissioner Vella on issues relating to Coastal management & maritime financial instruments, and Meritxell Serret i Aleu, Minister of Agriculture, Livestock, Fisheries and Food of the Government of Catalonia, who stressed that Regions are ready to provide their expertise on the common fisheries policy to DG Mare. Eleni Marianou, CPMR Secretary General, was also in attendance.

The positive meeting, which was organised at the invitation of President Cordeiro in parallel with the 6th conference in Maritime Spatial Planning Worldwide, concluded that the CPMR will contribute to initiatives aimed at promoting the maritime agenda during the Maltese Presidency, and in discussions about EU policies post-2020.

One of the key issues discussed during the meeting was how the maritime economy can best be supported by EU funds.

President Cordeiro stressed that it is important to keep EMFF as a fund for Fisheries and Maritime issues, and also to “keep maritime issues throughout the rest of the EU policies and most particularly within the overall regional policy approach”.

Discussions also focused on how regions are contributing to the efficient implementation of EU maritime policies. As a result, CPMR and Dg Mare will organise a second edition of the Blue.Invest conference with a focus on how regions are supporting the blue economy. A meeting between Dg Mare and CPMR regions on Fisheries will also be set to share expertise on implementation of EMFF and new CFP rules.

Further to the discussion on the outcome of the CPMR Vasco da Gama initiative on maritime skills, CPMR is expected to join the DG Mare expert group on blue skills and will contribute to upcoming initiatives in the area of maritime education.