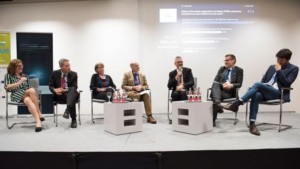 The CPMR represented its Baltic Sea Commission at the Submariner’s 2nd Conference ‘Better Off Blue’, held on 27-28 September in Berlin.

During the event, the CPMR took part in a roundtable discussion entitled ‘The Baltic Sea Region’s blue economy in the European Context.’

Beenhard Friess, Director for Maritime Policy and Blue Economy at the European Commission’s Directorate-General for Maritime Affairs and Fisheries (DG MARE) highlighted the progress and efforts developed in recent years to support a sustainable Blue Growth in the EU in general and more specifically in the Baltic.

He explained that DG MARE is working at building a business case for Public-Private investments in the maritime economy.

He also mentioned the opportunities both the 2018-2020 Horizon2020 work programme and EMFF direct management calls will offer in the coming months.

In its input, the CPMR echoed Mr Friess’ emphasis on maritime investments and stressed the remaining gaps that need to be bridged such as marine literacy, alignment of funding for blue growth and a more efficient multilevel governance.

The CPMR also mentioned the natural cooperation between its Baltic Sea Commission and Submariner and its collaboration with the Network of European Regional Development Funds Managing Authorities.