The European Parliament’s Seas, Rivers, Islands and Coastal Areas (SEArica) Intergroup organised a conference entitled ‘What next steps for OurOcean’ with the support of the CPMR and the Ocean and Climate Platform.

The conference, held on 10 January, brought together Karmenu Vella, the European Commissioner for the Environment, Maritime Affairs and Fisheries, members of the Intergroup and almost 200 representatives from regions, local authorities, the private sector, the marine research community and NGOs.

It provided an opportunity for the Intergroup to reiterate its full endorsement of the OurOcean Conference’s statement that “all of us depend on the ocean: for our water, our food, our climate and our air”, as already expressed in its 2015 Declaration for Oceans and Climate. The Intergroup do believe that a new vision is needed, along with strong and action-oriented commitments.

At the meeting, Commissioner Vella stated: “What we achieved in Malta is unprecedented. For 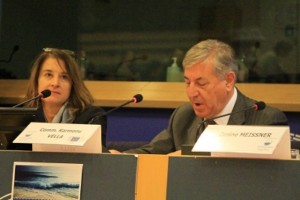 the first time in history at such a scale, the public and the private sector came together to form a true “ocean community”. We acted together, as one, for one shared objective: better managing 70% of the planet.”

President of the Intergroup, Gesine Meissner MEP, Vice-Presidents & MEPs, Sofia Ribeiro and Ricardo Serrão Santos, and member Deirdre Clune MEP, stressed that commitments should come from all stakeholders, including political bodies as well as the industry and civil society in order to have a concrete impact on the ground.

The MEPs echoed a statement by CPMR Secretary General, Eleni Marianou, that “international initiatives for our Oceans need to take Regional Authorities on board to get a real impact on the ground”.

Ms Marianou highlighted several examples of commitments undertaken by the Regions in line with Our Oceans priorities, which have been gathered in a new CPMR brochure.

She also announced that “the CPMR is currently launching a new initiative on marine litter in order to facilitate cooperation between regions and contribute to policy developments at EU level, and is open for collaboration with other organisations”.

George Alexakis, CPMR Vice-President in charge of maritime affairs, thanked MEPs for stressing the role of the regions in the European Parliament draft report on Ocean governance, which will be voted on 16 January.

The Västra Gotäland and Azores Regions also outlined the challenges and concrete commitments they are undertaking.