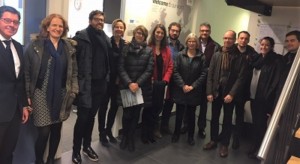 The CPMR’s Atlantic and North Sea Commission’s jointly organised a seminar in the Netherlands on November 29 to exchange best practices for the development of offshore wind energy.

The Atlantic delegation was made up of the Pays de la Loire region, accompanied by three offshore wind companies from the Loire Valley, the Pays Basque region notably represented by Councilor Arantza Tapia and representatives of the Basque Energy Agency, Basque test site BiMEP, and the Basque Energy Cluster.

On the North Sea Commission (NSC) side, Kerstin Brunnström, President of the NSC and Regional Councillor of Vastra Gotaland (Sweden), and Jaap Bond, member of the Executive Committee of the Noord Holland Region, were accompanied by representatives from the ports of Amsterdam and Ljmuiden, as well as the company MHI Vestas and the Wind Skills training organisation.

Moving into the afternoon, the regions involved attended the Wind Europe Annual Congress in Amsterdam. A workshop was organised in the stand of Basque Country Region which chaired the Atlantic Arc Commission Marine Renewable Energy Working Group.

Councillor Arantza Tapia and the Basque Energy Agency presented the key role of the Basque Country in the wind industry, as well as its potential for floating wind energy.

A discussion ensued on the theme of bringing private sector concerns closer to regional renewable energy policies. A representative from Wind Europe presented the issues on which the support of the regions was requested by the sector, including:

The Atlantic Arc and North Sea regions will deepen their work in these areas at their future working groups.

For more information, please consult the page of the event, as well as the forthcoming meetings of the Energy Working Groups of the Atlantic Arc and North Sea Commissions.