Eleni Marianou, Secretary General of the CPMR, moderates a debate on territorial approaches to implementation of the SDGs

The vital role that Europe’s local and regional governments can play in tackling global issues of human development in the 21st century such as poverty and inequality, climate change and sustainable cities, in the framework of the newly adopted 2030 Agenda for Sustainable Development, was addressed at a major seminar in Brussels on 14 June 2016.

Led by the Basque Government and the Conference of Peripheral Maritime Regions of Europe (CPMR), in partnership with PLATFORMA, and with the support of the ART Initiative-Hub for Territorial Partnerships of the United Nations Development Programme (UNDP), the seminar gathered representatives of regional and local governments from across the globe and their associations, as well as high level officials from the European Commission, the UNDP and the Organisation for Economic Co-operation and Development (OECD).

The seminar “Integrated territorial partnerships and the SDGs: How to leave no one behind”, held on the on the eve of the European Development Days, examined how local and regional governments, through territorial partnerships and decentralised cooperation initiatives, contribute to the implementation of the 2030 Agenda for Sustainable Development and its Sustainable Development Goals (SDGs); and hence to the economic development, social cohesion and environmental protection of their communities. 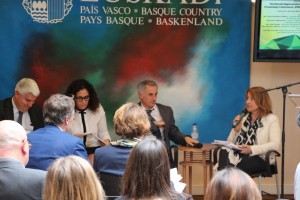 Participants considered ways in which regional and local governments, using their decades of experience in delivering public services for their citizens and establishing peer-to-peer learning initiatives, can partner with other critical actors in their territories – such as the private sector, academics and civil society organisations – for the implementation and localisation of the 2030 Agenda.

Tools and innovations to foster coherence, effectiveness and accountability in decentralised cooperation initiatives were shared. The harmonization and alignment of all development actors were recognized as critical to effectively address the challenges related to implementation of the SDGs locally. The questions of vertical and horizontal coordination for the implementation of the SDGs in order to achieve multi-level governance and cross-sectoral solutions were also examined in detail.

Rosario Bento Pais, Head of Civil Society, Local Authorities, DG International Cooperation and Development and (DEVCO), European Commission, said: “What is new with the SDGs? You need to get local or you go out of business.” 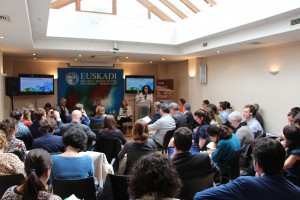 Paul Ortega, Director the Development Cooperation Agency of the Basque Country, and CPMR External Cooperation Working Group Leader, said: “With Agenda 2030, the overarching aim of policy coherence forces a cultural change in our institutions, from an approach of isolated projects to coherent strategies for multi stakeholder decentralised cooperation initiatives.”

Flavia Donati, Director, Partnerships and International Cooperation, Tuscany Region, PLATFORMA representative, said: “Multi level dialogue can be a concrete way to show that when local authorities have a dialogue at national and international level, become more aware of the problems and of the role they can play in solving them.”

Ikbel Kerkeni, Director, International Cooperation, Sousse Governorate, said: “In a changing social and political environment, such as Tunisia, it is an imperative for regional governments to serve citizens with efficiency and accountability.”