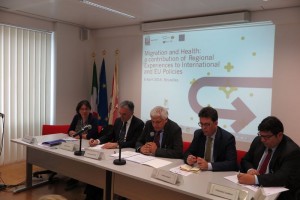 The unique role that regions can play in the immediate and long-term within EU migration policy was highlighted by the CPMR at the 2nd European Migration Forum on 6 and 7 April 2016 in Brussels.

Co-organised by the European Commission and the European Economic and Social Committee, the Forum meets once a year as a platform for public debate and exchange on the current migration agenda; this year’s theme was “A long-term approach to sustainable labour migration and successful integration – the voice of civil society” and coincided with the European Commission’s Legal Migration Package presented on the same day. The participatory workshops covered the subjects of Low- and medium-skilled migrant workers; Undeclared work and the exploitation of migrants; Access to the labour market for refugees and asylum seekers Migrants’ integration in local economies – Role of local and regional authorities.

On the same day, the challenges in the area of migrants’ health and the role of the regional level were discussed at a public event on “Migration and Health: a Contribution of Regional Experiences to International and EU Policies”, hosted by the President of Tuscany region Enrico Rossi at the representation office of the region in Brussels. Through a multi-stakeholder approach and discussion, the panel took stock of progress and identified the challenges in the area of migrants’ health among participating institutions, especially on policies, programmes or services available for migrants. The objective of the event was to raise awareness and promote mutual understanding of the issue among international institutions and regional governments and to provide a forum for exchange of experiences and best practices with the aim to ensure migrants’ access to social and health care.

The CPMR shared the main work of the global CPMR Task Force on Migration, which since 2015 has been promoting the exchange of experiences among regional experts on different issues concerning migration (migrants reception, socio-economic integration policies, etc.). Among other initiatives it has set up relevant workshops and seminars to promote dialogue between elected representatives from regions and EU institutions, carried out specific lobbying actions including the production of technical and political documents) and launched a solidarity and awareness raising campaign: www.tousmediterraneens.com recently acknowledged by the Parliamentary Assembly of the Mediterranean, which has collected so far more than 1 400 signatories mainly from Public Authorities and NGO representatives. The Task Force also aims to support the development of projects of interest for its members. Among other things it is exploring the possibility for a MIPEX – REG project (Migrants integration policy index at regional level–as a tool to analyse, compare and improve integration policy, by enhancing regional practices), and has joined two applications in the latest AMIF calls, one on the integration of migrants at work and the second on the integration of migrants in social and health systems.

More information on the Event “Migration and Health: a Contribution of Regional Experiences to International and EU Policies”