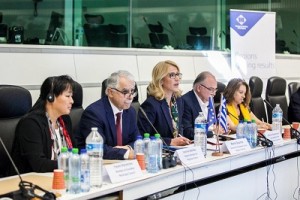 The CPMR and its member, the Attica region, held a high-level conference in Brussels on 23 April to raise awareness among the EU institutions on the importance of multi-level governance and the involvement of regional authorities in tackling issues related to migration and asylum.

The Conference on ‘Migration and the Role of Regions’, held at the European Committee of the Regions (CoR), was attended by over 120 people and involved key speakers from local and regional authorities, EU Institutions and other key stakeholders and organisations, including the OECD and ICMPD.

High level speakers included Dimitrios Papadimoulis, Vice President of the European Parliament, Mercedes Bresso, Member of the European Parliament, Christos Stylianides, EU Commissioner for Humanitarian Aid & Crisis Management, Yoomi Renström, Member of Ovanåker Municipal Council and the Committee of the Regions, Ioannis Balafas, Deputy Minister for Migration Policy, Greece, and Rena Dourou, Governor of the region of Attica, representing both the CPMR and the Congress of Local and Regional Authorities.

Discussions focused on the implementation of the 2015 EU Agenda on migration, the recast Common European Asylum System and the 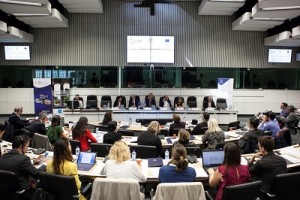 external dimension of migration policies. The meeting also highlighted the experiences and visions of the CPMR’s regions in relation to the reception and integration of migrants and refugees, as well as cooperation actions.

Several CPMR member regions attended the meeting, with eight of them undertaking specific roles due to their representation at political level (regional ministers and governors in charge of migration and governors): Attiki, Region Skåne, North Aegean, Tuscany, Catalonia, Sardinia, Murcia and Asturias.

They presented outstanding regional experiences such as the ‘spread’ reception system in Tuscany described in its White paper and elaborated through an effective participatory process, the innovative multilevel reception and integration system ‘Partnership Skåne’, and the intercultural integration model in Catalonia, based on interaction, which aims to create citizens through the recognition of rights.

Asturia’s support for Syrian and Iraqi people living in Zaatarí refugees camp was also highlighted, along with Sardinia’s cooperation approach in the Mediterranean, for cooperation with origin countries. 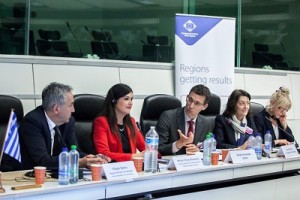 Rena Dourou, Governor of the Region of Attica, said: “Local and Regional Authorities of EU countries such as Italy, Spain and Greece are called upon to address the migrant phenomenon, whilst ensuring social cohesion and tackling the rise of xenophobia. We are doing well to some extent, proving how our role may be vital. For, we represent links on the chain of a common EU immigration and asylum policy at all three levels of governance: European, national, local and regional.”

“Today, more than ever, there is an urgent need for this chain to be strengthened, in the form of a new, cohesive European policy based on fair sharing of responsibility for addressing this phenomenon.”

The CPMR Issue paper on ‘Migration and Asylum in EU Regions’ was presented at the conference by Anna Terrón, President of Instrategies and consultant for the CPMR on migration issues.

This paper calls for the reform of EU Migration and Cohesion policies and their financial instruments for the post-2020 period, to increase acknowledgement on the added value and potential of the role of regions.

It provides evidence and recommendations on why regions should be given the resources and why they say they need to help manage migration and asylum more effectively on the ground, particularly when it comes to the reception, integration of migrants and refugees, or diversity management, in a more integrated EU space.

Speaking at the meeting, CPMR Secretary General, Eleni Marianou, said: “Now is the moment, given the announcement of the EU budget proposals, for a more streamlined situation, where the integration and reception of migrants, already happening in regions, could be funded more effectively through a reformed EU migration policy. To this extent, cooperation between all levels of government is crucial.”

Paraskevi Michou, Director General, DG Migration and Home Affairs of the European Commission stressed that “integration, which is a key element for security and social cohesion, cannot happen without the help of local and regional authorities”.