Migration an active role for regions and cities 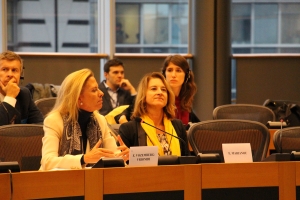 Regional and Local Authorities are confronting a severe migration emergency being on the front line without sufficient means, often bearing the human, financial and technical responsibility of saving lives and supporting migrants in their economic and social integration. They are forced to manage a migratory crisis that affects, beyond the Mediterranean, the whole of Europe, too often by using their own limited resources.

In the framework of the Open Days, the CPMR with the Regions of North Aegean, Sicily and Calabria and with the support of Eurocities and the CEMR, organised on 14 October 2015 an exchange of views focusing on migration and the role the EU regions need to play in the refugee crisis.

The event was hosted by the Greek MEP Eliza Vozemberg (EPP) and chaired by Eleni Marianou, Secretary General of the CPMR. It took place in the European Parliament just one day before the discussions of EU Heads of State and Governments during the EU Council meeting on the same issues.

The greater the involvement of Local and Regional Authorities within the context of future decisions taken by the EU on migration policy, the more effective the solution to this crisis will be. Indeed, Regions are not only asking for financial help, but call for a greater involvement in future EU political decisions on matters that significantly affect their citizens.

“We are not beggars: it is not only for the solidarity principle that we must host refugees, but for a simple sense of humanity and in such an urgent situations, urgent measures must be taken”, affirmed the Governor of South Aegean, Giorgos Chatzimarkos, during his speech.

Migration can also be an opportunity for Regional and Local authorities.

“Immigration can boost growth, as it was in the past in the United States, Australia and Germany: we should focus on promoting the culture of integration and not the culture of hate,” declared the President of Sicily, Rosario Crocetta, highlighting also that “Sicily has made its history from integration”.

Different MEPs attended the debate, including Jo Leinen (S&D – DE), Cécile Kyenge (S&D – IT), Andrea Cozzolino, (S&D – IT) and Laura Ferrara (EFDD – IT). Some of them focused on EU funds that can be devoted to Regions. Andrea Cozzolino, (S&D – IT) underlined that “the unspent regional funds for the period 2007-13 could be used to finance the migration emergencies”, but Laura Ferrara (EFDD – IT) replied affirming that “rather than more money, we can use the amounts we already have with greater transparency and traceability and making sure that their impact on the ground responds more to the needs of citizens”.

During the debate, the Commission was represented by Marta Cygan, Director in charge of “Strategy and General Affairs”. Responding to different delegates highlighting concrete examples and best practices, such as Roger Albinyana i Saigí, State Secretary in charge of Foreign Affairs of Catalonia, she affirmed that she would inform Commissioner Dimitris Avramopoulos in charge of Migration, Citizenship and Home Affairs, about the CPMR’s messages in order to involve regions more in the future discussions.