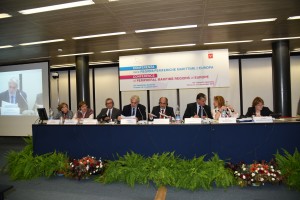 After being part of the CPMR’s work programme for several months, migration issues were at the core of discussions during the CPMR General Assembly that gathered in Florence on 5-6 November 2015 in the presence of Christos Stylianides, the European Commissioner for humanitarian aid and crisis management.

In these last few months, among other initiatives, the CPMR Regions have addressed an open letter to the Heads of States and Governments asking for their solidarity and a letter to President Juncker proposing the use of unspent European Funds to partly fund established emergency response actions. In addition, the President of the Association of Greek Regions and the Governor of North Aegean Christiana Kalogirou met with President Juncker to discuss among other issues the refugee crisis. The CPMR Regions have also actively demonstrated their solidarity by endorsing the awareness-raising public petition campaign “We are All Mediterranean”.

In Florence, the CPMR delegates decided to formally vote a declaration on these issues, calling for “a considerable increase of efforts and resources dedicated to the socio economic integration of migrants and a stronger participation of regions in the EU consultation and decisional process.”

Indeed, different CPMR Regions are confronted with a severe humanitarian emergency, being on the front line without having sufficient means, often bearing the human, financial and technical responsibility of saving lives and supporting migrants in their economic and social integration. They are forced to manage a migratory crisis that affects, beyond the Mediterranean, the whole of Europe, too often by using their own limited resources.

Furthermore, Regions have also a duty and a responsibility to ensure the integration of migrants and refugees in their respective territories. On the one hand they fight discrimination, racism and xenophobia, while at the same time aiming to promote dialogue, ensuring the education of the refugees’ children, encouraging the learning of languages and guaranteeing optimal health care for all.