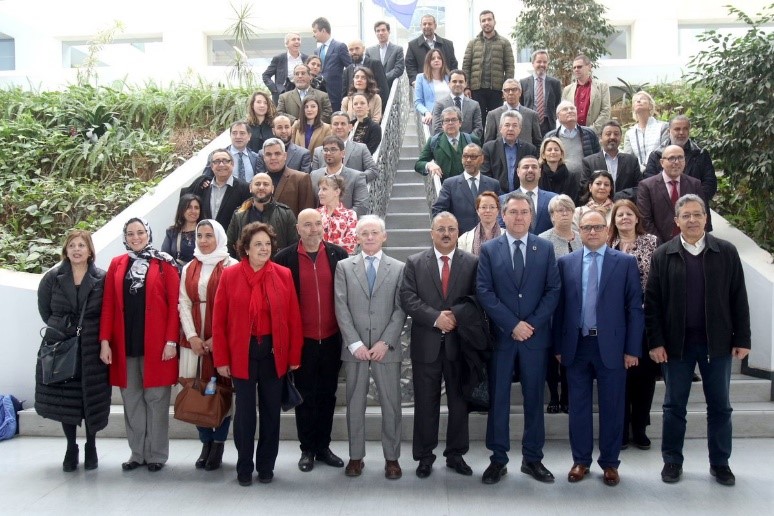 The CPMR’s Intermediterranean Commission (IMC) took part in the 10th Plenary Session of the Local and Regional Euro-Mediterranean Assembly (ARLEM), on 26-27 February in Sevilla, in Andalucia, Spain.

This year the ARLEM Plenary put youth and women’s entrepreneurship, governance and transparency in the spotlight, with the approval of two new reports and a specific award. The ARLEM also gave special attention to migration and the instrumental value of Local and Regional Authorities in implementing such policies on the ground.

The first day involved parallel workshops, one which tackled migration and the role of Regional and Local Authorities (RLAs), as well as the ARLEM Bureau and members coordination meetings. 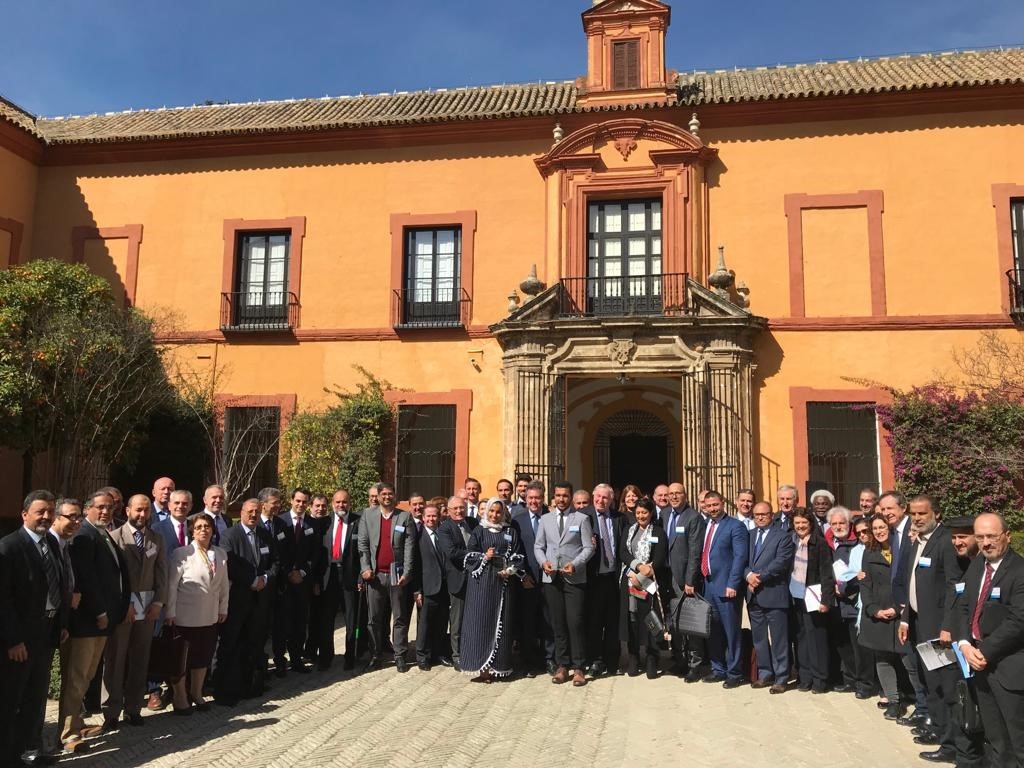 The CPMR IMC co-organised a side event on migration, along with the Association of European Border Regions (AEBR), tackling the role, needs and added-value of LRAs in dealing with the internal (reception and integration) and external (cooperation) dimensions of migration.

This involved input from the co-organisers, ARLEM-CoR members, Regions like Catalonia, Andalusia and Occitanie, Networks such as United Cities and Local Governments, MedCities, and the Union of Municipalities of Turkey. The participants shared views, practices and projects from territories of origin, transit and destination of migrants, refugees and asylum seekers.

The IMC shared the experiences and vision of its CPMR Task Force on Migration, including its surveys and the recent publication of an issue paper on “Migration and Asylum in EU Regions: towards a multilevel governance approach”.

It also highlighted the upcoming visual mapping tool on the multi-level governance mechanisms for migration management, as well as several projects (e.g. on indicators and tools for integration of migrants) and a new issue paper developed with the support of Instrategies on the external dimension of migration policy and the role of the regions. This paper will be released during March.

Davide Strangis, Executive Secretary of the CPMR-IMC and coordinator of the CPMR Task Force on Migration, presenting the conclusions of the workshop before the ARLEM plenary, said: “The meeting stressed that Regional and Local Authorities, as the closest authority to the citizens, are instrumental on migration and asylum policies and even in the implementation of European policies on the ground.

“RLAs are key players in the internal dimension of migration, supporting reception and accommodation (providing an added value on key aspects like healthcare or the management of non-accompanied minors), boosting social inclusion and cohesion (for instance through diversity management, housing, education, or providing access to the labour market). 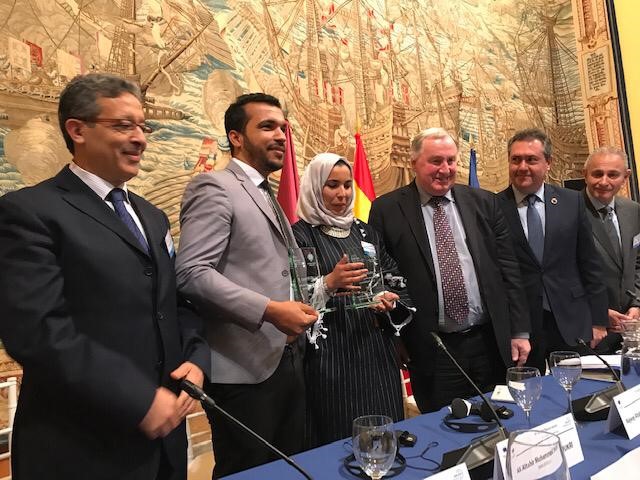 “Lately we have seen that they have also a great potential in the external dimension, working in decentralised cooperation, technical and humanitarian assistance.”

The workshop also underlined the importance of a holistic and multi-level approach in dealing with migration that should tackle the root causes of migration, while working on schemes for legal and circular migration and fighting against smuggles.

In this framework, the role of RLAs should be more considered in the recast of the Common European Asylum System (CEAS), in the implementation of the EU Agenda on Migration and in the EU funds dealing with different aspects of migration policies in the post 2020 period (including the new AMF, NDICI, ESF+ and Cohesion policy), in coherence with the Agenda 2030 and the Sustainable Development Goals.

The ARLEM Plenary Session took place on the second day of the event. Following a welcoming speech by the Mayor of Seville, Juan Espadas and the Regional Minister of Andalusia for Economy, Knowledge, Enterprises and University, Rogelio Velasco that stressed the importance of strengthening RLAs in order to give consistent answers to the demands of citizens.

The President of the European Committee of Regions, Karl-Heinz Lambertz, reminded that “the challenges we are confronted today, call for a local and sustainable approach” as well as the importance “to enhance cooperation and unlock the great potential of the Mediterranean”. 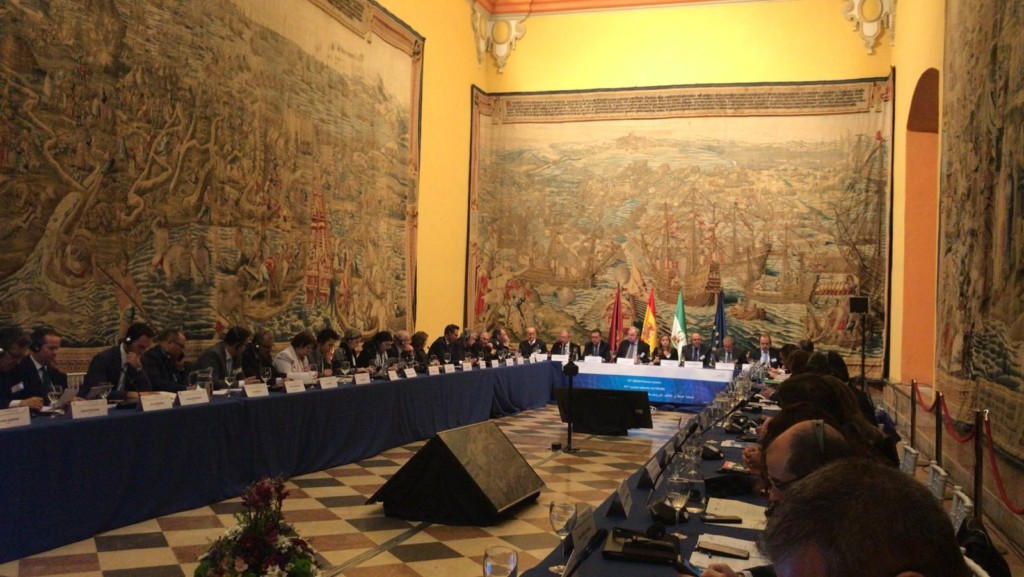 In addition, the opening session also included statements by Luca Jahier, President of the European Economic and Social Committee and Nasser Kamel, Secretary General of the Union for the Mediterranean who stressed the relevance of ARLEM’s collective work after having celebrated its 10 years anniversary and the importance of bringing the Euro-Mediterranean partnership closer to the interests and expectations of its citizens.

Lahcen Amrouch, Mayor of Argana in Morocco and representative of ARLEM’s co-President Mohammed Boudra at the meeting, said: “Youth entrepreneurship is a priority for ARLEM. That is why we have launched the ARLEM Award to promote young entrepreneurship and give visibility to those that are not discouraged by the difficulties of starting a new business. We urge national governments to simplify business legislation, reduce the administrative and tax burden, and create business incubators and micro-credit schemes to boost young entrepreneurship”. 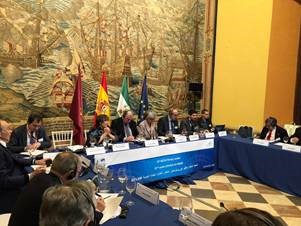 After the presentation of the Nicosia Initiative, supporting local communities in Libya, by Manuel Pleguezuelo of Region Murcia, the Assembly disclosed its political recommendations for 2019 and announced Vincenzo Bianco, ARLEM member and former Mayor of Catania (Sicily), as the rapporteur for Blue Economy. Mr. Bianco got the full support of the UfM and the CPMR IMC, which happily offered its contribution to the upcoming ARLEM thematic report holding a wide experience, policy and project activity on the subject.

The 10th Plenary Session ended with the ARLEM Young Local Entrepreneurship in the Mediterranean Award Ceremony, that honoured Zimni Jeed and creators Najway Altahir Mohammed Shukri and her brother Ali Shukri, a fashion and textile company of three years based in Tripoli, Lybia.

The Presidency of the CPMR Intermediterranean Commission, Region of Western Greece, participated in the evaluation board of this award. The organisation warmly congratulated the winners.