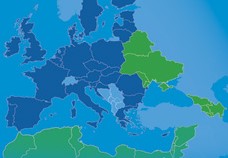 In this response, the CPMR stated that the reviewed policy should rely on a genuine, partnership-based and long-term role for Regional Authorities and take on board the territories in their diversity and as contributors to development.

Since 2011, the context of Neighbourhood Policy has changed and evolved in an increasingly complex geopolitical situation at the borders of the EU, with several on-going conflicts, the consequences of the Arab Spring, increasing threats to security such as terrorism attacks, the humanitarian crisis related to migration issues and the long wave of the economic and financial crisis. A further reorientation and update of the global strategy of the ENP is thus needed.

Therefore, the CPMR advocates that a flexible funding mechanism should be introduced into the European Neighbourhood Instrument implementation arrangements, aiming to encourage joint actions between Regional Authorities, Associations of Regions and other stakeholders in order to achieve this.

It also promotes sound “territorialisation” and co-ownership of the ENP putting decentralisation at the core, and the application (and adaptation) of the partnership principle, the instruments and methodology of EU Cohesion Policy.

In this context and regarding the Mediterranean Basin, the CPMR response underlines a set of specific recommendations concerning in particular the effectiveness of territorial cooperation and the importance of introducing or applying macro-regional and sea basin approaches in the whole Mediterranean area, following the pilot experience of the EUSAIR. The CPMR contribution also points out the urgency of integrating the ENP with the CFSP and, in a coherent way, the global approach to migration, with an attitude of solidarity.

More specifically on the Black Sea it relaunches a Sea Strategy, which requires the mobilisation of the Commissioners concerned and of their services, in connection with the EU’s diplomatic services (EEAS). As for the Black Sea basin, the CPMR calls for an actual relaunch of the – until now very reticent– Black Sea Synergy.

The document includes several more specific recommendations concerning both eastern and southern components of the ENP, and regarding for instance institutional capacity building activities.