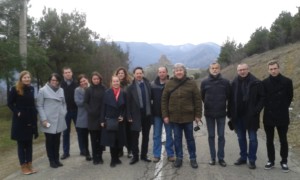 The seminar, organised as part of the PLATFORMA Eastern Neighbourhood Programme run in Georgia, the Republic of Moldova and Ukraine, focused on the status of public administration reforms and decentralisation in these countries, as well as EU programmes and how to provide tangible results to citizens.

The CPMR is an active PLATFORMA partner, with members in the Republic of Moldova and Ukraine, and a particular interest in the Eastern Neighbourhood, thanks to Mr Horia Teodorescu, President of Tulcea County Council (Romania) and CPMR Vice-President in charge of Neighbourhood Policy.

During the meeting, the CPMR’s Balkan & Black Sea Commission (BBSC) presented its actions to help develop the work of the Eastern Partnership.

To find out more about the meeting, take a look at the presentations, photos and a video for the event. The next PLATFORMA Eastern Neighbourhood Coordination Seminar will be held in Chisinau (Republic of Moldova) in September 2017 (date tbc).

For interested members, the CPMR, in collaboration with the Basque Government, Lead Region of its External Cooperation Working Group, has launched a questionnaire with the aim of identifying experiences that can contribute to providing the core elements of a new generation of effective decentralised cooperation partnerships.

The information received will be collected and analysed and used as a basis for the study ‘Shaping a new generation of decentralised cooperation for enhanced effectiveness and accountability’. Find out more