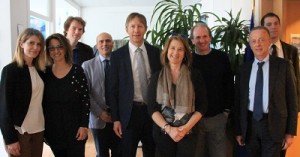 The CPMR is coordinator of the innovative new AI-NURECC Initiative, which aims to support the implementation of the European Union Strategy for the Adriatic and Ionian Sea Region (EUSAIR).

The AI-NURECC Initiative, which stands for Adriatic Ionian Network of Universities, Regions, Chambers of Commerce and Cities, is an 18-month initiative involving key stakeholders from the Adriatic-Ionian Regions.

They have joined their efforts to contribute to the achievement of the EUSAIR political objectives and to foster the sound implementation of its Action Plan, working in close cooperation with the thematic strategy groups, the EUSAIR Facility Point, as well as the Adriatic-Ionian Initiative.

The final goal of the initiative will be to promote a structured dialogue and a stronger, more effective cooperation among regional & local authorities, universities, chambers of commerce, youth associations and networks, entrepreneurs and civil society.

The EUSAIR was officially launched by the European Commission on 18 June 2014 and approved by the EU Council on 24 October 2014. It promotes economic and social prosperity and growth in the region by improving its attractiveness, competitiveness and connectivity. It comprises eight macro-region countries, including 4 EU Member States: Italy, Slovenia, Croatia, Greece and Bosnia and Herzegovina, Serbia, Montenegro and Albania.

Find out more about the AI-NURECC Initiative.

AI-NURECC presented at Infoday: The Future is Near

The AI-NURECC Initiative was presented at the information day Europe for young people, culture and creativity in the Adriatic-

The information day was organised by the project’s partners the Forum of the Cities – FAIC, Forum AIC and Uniadrion, in collaboration with the Europe Direct Marche Region. The aim of the event was to help young people become more aware of European policies for the Adriatic-Ionian region, a key geographic area.

The information day served as a bridge between EU Member States and Candidates for EU membership, finding new common ground and greater social, cultural, and economic cohesion between the two. The event was linked to the initiatives of the European Year of Cultural Heritage 2018 and the development of an action plan for EUSAIR. Find out more about the information day.