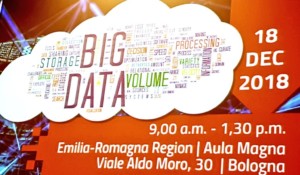 On December 18, 2018 in Bologna, the Emilia-Romagna Region celebrated its event entitled “Big Data, from volume to value: Regional empowerment and value chain networks in a Mediterranean perspective.”

The event “Big Data, from volume to value” aimed to introduce the Big Data hub that has been set up by the Emilia-Romagna Region for the development of the entire Mediterranean and Adriatic-Ionian areas. This hub involves a great variety of actors and acts as a support to knowledge, skills, infrastructures, for a new stable employment and enhancement of the territories of Southern and Mediterranean Europe. 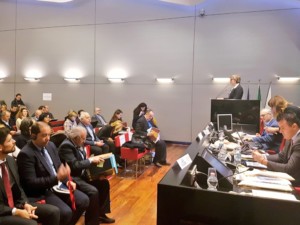 Emilia-Romagna indeed counts with infrastructures and the presence of machines and skills that would be made available to handle huge amounts of data, as introduced by Mr. Patrizio Bianchi, Regional Minister for Coordination of European policies for growth, education, vocational, training university, research and labor and 1st Vice-President of the CPMR Intermediterranean Commission. Various actors presented the Region’s infrastructures and tools in more details, explaining the interrelation between multisectoral and multilevel entities, counting with public facilities and infrastructures, private incentivized companies, universities and high competence training centers, dissemination events and exhibitions, and European and international networks such as the Vanguard Initiative.

Mr. Fabio Fava, representing the BlueMed initiative, exposed the concrete link between big data and the Mediterranean economy, underlining details such as the need to handle data gathered by monitoring and sensors on sectors as maritime transport traffic, activities exploiting the sea resources, biodiversity, tourism, renewable energy, among others. Gathering and analyzing data is indeed key to deal with global issues such as sustainable economic development or climate change, and should be performed globally through a shared vision.

The representative of the Directorate General for Communication networks, content and technology of the European Commission, Gail Kent, explained the European strategy on BIG DATA together with the perspectives for the 2021-2027 programming period which opens several opportunities for key territorial stakeholders, as the regions, the academia and the private sector.

Complementarily, various IMC regions shared their expertise as regards the need to handle big data in the Mediterranean such as Catalonia that is concretely working with territorial actors to foster social innovation and research (clusters, Barcelona Activa, etc.), as explained by Mrs. Mireia Borrel Porta, Director General for Foreign relations, of Catalonia. Likewise, Mr. Ettayeb El-Masbahi, Vice President of the CPMR Intermediterranean Commission and Vice President of the Region of l’Oriental (Morocco), exposed the ways of how big data is key for the Southern Mediterranean countries, among which Morocco and its region, and underlined that L’Oriental will put great efforts into developing its competences in handling big data to create a solid base for knowledge sharing and sustainable socio-economic development.

Following these experiences and the impetus of its members regions, as stated by Mr. Nikos Balabanis, representative of the Presidency of the IMC and Deputy of the Governor of Western Greece for Environment and Energy, the IMC-CPRM has taken on the theme of big data, which has a huge potential for territorial policies (e.g. Environmental/Climate related policies, Socio-Economic Cohesion, Health etc.) and will address it also during its next Political bureau of February 4, 2019 in Barcelona.

The IMC-CPMR will hence adapt its working plans including big data as a very relevant issue, and see to the development of concrete actions over the upcoming mandate.

Click HERE for the presentations made by the speakers!

For more details, get in touch with: davide.strangis@crpm.org or elodie.nunes@crpm.org.