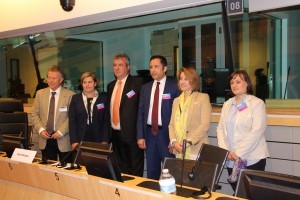 While cooperation programmes supported by the ERDF, IPA and ENI are entering into an operational phase, different macro-regional strategies are already being developed and initiated. However, the Black Sea Synergy is slow to find its place in this changing landscape, and the Eastern Partnership is hindered by events in Ukraine and their geopolitical implications. In this framework, on 29 May the Conference of Peripheral Maritime Regions (CPMR) and the Committee of the Regions co-organised a conference on “The Balkan and the Black Sea Area on the move: perspectives for Regional Authorities”.

Although Regional Authorities welcome the European Commission guidelines on Neighbourhood Policy, emphasising democratic and economic reforms and strengthening economic governance, institutional capacity, and the rule of the law, they consider that these objectives will be best achieved if they can rely on the mobilisation of representatives of society and the citizens they represent. This implies finding ways and means to involve regions in the preparation of programmes and strategies, as well as in their implementation.

“When political instability and economic uncertainties shake a region, I believe that cooperation becomes more necessary than ever, and meeting your peers via face-to-face cooperation is what Local and Regional Authorities do,” stated Markku Markkula, President of the European Committee of the Regions.

This vision was shared by Eleni Marianou, Secretary General of the CPMR, who underlined that “cooperation programmes have to be managed like the structural funds: involving regions not only in the preparation of their strategies, but also in their implementation.”

Hanna Jahns, Advisor to Commissioner Johannes Hahn, also offered her contribution to the debates, calling for a bottom up review of the EU neighbourhood policy, leading to a real role for regions in the implementation of the policy.

The proceedings were closed by Mircea Stoian, Councillor of Tulcea County (RO) and President of the CPMR Balkan and Black Sea Commission who referred to the just adopted CPMR Balkans and Black Sea Regional Commission Final Declaration. “Not surprisingly, our first priority goes to the promotion of a peace and reconciliation process, but peace is not only a question of diplomacy; it also builds on people to people cooperation, shared cross-border and transnational projects and on this Regions have a big role to play” He stated.

This Conference followed the Balkan and Black Sea Regional Commission (BBSRC) 2015 General Assembly that was organised at the Committee of the Regions and two BBSRC Working Groups on Tourism and Business Cooperation. A Final declaration was also approved during the General Assembly.