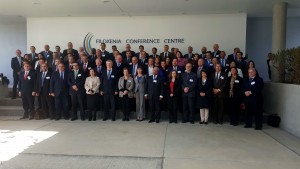 The seventh plenary session of ARLEM (Euro-Mediterranean Regional and Local Assembly) gathered more than 100 delegates from all over the Mediterranean Sea in Nicosia (CY) on 18-19 January 2016. The Union for the Mediterranean, the European Commission and the United Nations were also represented.

Konstantinos Karpetas, Regional Councillor of Western Greece, represented the CPMR Inter-Mediterranean Commission in his capacity as Vice-President. During the debates and referring to the CPMR’s work he highlighted that “the Mediterranean migration crisis has shown that Europe and the international community have grossly inadequate systems for handling the situation, and the Regions in the Mediterranean, without the necessary resources and means, have so far borne tremendous burden, on an ad-hoc basis. We need EU assistance to address the negative impact of the migration crisis in our territories and direct access to the Asylum, Migration and Integration Fund and the financing from the relevant Directorates. But most of all, as the financial implications of the crisis pale in comparison to the human cost, we need a brave integrated approach at EU level that will address the migration crisis at its roots.”

The first ARLEM working sessions focused on “sustainable urban agenda” and on “employment & territorial development” in the Mediterranean region, with the approval of the two related reports for 2015. The second document, which recovers and further develops the main messages included in the previous report on a “Cohesion Policy for the Mediterranean” (led by CPMR IMC in 2013/14) proposes to focus the future Euro-Med Strategy on inclusive growth and social cohesion as a goal per se, prioritising investment in a smart and sustainable way and the well-being of people as a way to strengthen economic growth.

The ongoing review of the European Neighbourhood Policy (ENP) and the “management of migration” in the Mediterranean region were also issues largely discussed by the participants. For his part, the IMC Representative recalling its recent Rabat Declaration underlined that improving capacity building of public sub-national authorities will be one of the keys for success of the ENP, together with emerging macro regional and sea basin strategies. In this framework, the perspectives for a new maritime strategy for the Western Mediterranean and the work of the UfM on the Blue Economy will be a good opportunity for cooperation involving the key territorial actors of both shores and a test case for the whole area.

In order to facilitate territorial development and despite the complex geo-political situation in the area, different participants also called for more cooperation between local and regional authorities and civil society for improving democratic governance, and discussed about the prospects for cooperation with local authorities in Libya. In this context several preliminary offers of support were made to municipalities in Libya (represented for the first time in ARLEM) including a specific platform proposed by the mayor of Nicosia, through which EU local authorities could coordinate and channel their support for Libya.

Several other IMC members were also present including Mr Sadiki, Vice-President of the IMC, regional councillor of the Region Rabat-Salé-Kenitra and Mayor of Rabat – who was chosen as rapporteur for the new 2016 report on climate and energy. Other representatives like Mr Arnoutakis, Governor of Crete, and the President of Sicily Region, Mr Crocetta, actively participated in the discussions. Mr Pigliaru, President of Sardinia Region, was appointed rapporteur for the 2016 report on cross-border cooperation. The IMC will contribute to the preparation of both documents.

Finally, ARLEM concluded its Plenary approving the action plan for 2016 and a set of key political messages that will be transferred to the relevant institutions.