Another ship sinks in the Mediterranean: Michel Vauzelle, the shame! 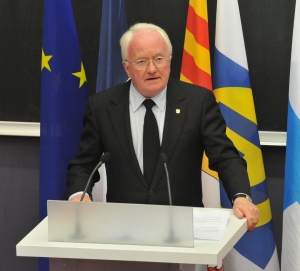 “Still today, hundreds of people would rather die drowning in the Mediterranean than through starvation or misery in their homeland. Italy has rescued and taken in these victims off the coast of Sicily and Calabria on its own. What is Europe doing? For France, the President of the Republic has provided an answer today. We are proud of it.” Declared Michel Vauzelle.

“Pope Francis has spoken before the European Parliament of “a tired Europe that finds itself facing a Mediterranean that has become a cemetery”. The spirit of 11 January, a subject of pride for French people, should prevail in the Mediterranean. The people of France who took to the streets on 11 January, just as the people from Tunisia on 29 March, are waiting for a “We all are Mediterranean”, which honours a Europe that teaches lessons.” Concluded the President of the Intermediterranean Commission.

The Intermediterranean Commission has already adopted a Policy Position on “Migration Policy and the Challenges of Managing the Mobility of People” during its last Political Bureau in Marseille, on 10 December 2014. An ad-hoc Task Force on migration was approved by the CPMR Political Bureau on 27 February 2015, in Nantes and will start work on 23 April, with the participation of the Regions from the various CPMR Geographical Commissions.