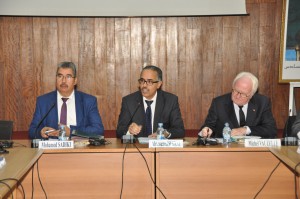 In its Final Declaration, different political messages have been stated, focusing on the joint efforts for peace and dialogue in the context of the latest tragic events in the Mediterranean and in particular on the challenges and added value of decentralisation and cooperation, as well as on the new European migration and neighbourhood policies.

During the discussions – in the presence of a representative of the Delegation of the European Commission in Morocco – participants debated on the last EC communication on the ENP and underlined the importance of strengthening the coordination between neighbourhood policy and the relevant financial instruments or funds linked to other EU policies.

In this framework, according to the CPMR Intermediterranean Commission, the development of specific instruments like Macro-Regional or Sea-Basin strategies and Territorial Cooperation shall be boosted at financial and operational levels, and made more effective in the whole Med region. In this perspective, IMC Regions offered their contribution to the setting-up of the emerging maritime strategy for the Western Mediterranean.

Furthermore, the good methodology of the EU Cohesion Policy can be adapted in the European Neighbourhood Instrument framework in order to better involve Local and Regional Authorities (LRAs) and the Civil Society in a “territorialisation” of the policy, which is still lacking.

During the discussions about the last improvements of regionalisation in Morocco, delegates also highlighted that the decentralization of powers and decentralized cooperation are among the best instruments to ensure a major stability and security of the Mediterranean area in the long run. Particularly, the EU and Euro-Mediterranean Institutions shall better exploit the potential of involving local and regional authorities in the conception and implementation of some policies, strategies and concrete cooperation actions on the ground.

In the approved final declaration, the CPMR Intermediterranean Commission called also for an ambitious shared commitment concerning the actions on climate change adaptation and mitigation in the run-up to the meeting of the COP21, and recommended national Governments and International Institutions to better consider and take stock of the roles and actions of Local and Regional Authorities and the Civil Society.

In relation to synergies with the UCLG, the Political Council of the UCLG’s Mediterranean Commission (www.commed-cglu.org) was also held on 26 November, and Mediterranean Regions were invited to attend and actively take part in a seminar on the quality of public services.