The CPMR has signed a Cooperation Agreement with the International Centre for Black Sea Studies (ICBSS). This very positive step will mean the two organisations can work closely together to further synergies and joint activities in the wider Black Sea region.

The Cooperation Agreement was signed in the framework of the 47th General Assembly of the CPMR, which was kindly hosted in Palermo by the Region of Sicily (Italy), by CPMR Secretary General, Eleni Marianou, and ICBSS Director-General, Georgios Mitrakos. 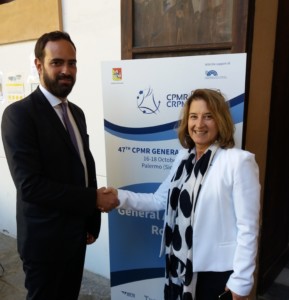 The ICBSS is an independent research and training institution focusing on the wider Black Sea region and a related body of the Organization of the Black Sea Economic Cooperation (BSEC) and serves as its acknowledged think-tank.

The countries covered by the ICBSS are Albania, Armenia, Azerbaijan, Bulgaria, Georgia, Greece, Romania, the Republic of Moldova, the Russian Federation, Serbia, Turkey, and Ukraine.

This Agreement is a valid continuation of the interactive cooperation that the CPMR and the ICBSS established some time ago.

The CPMR’s Balkan & Black Sea Commission (BBSC) and the ICBSS have mutual interest to promote constructive dialogue within the wider Black Sea region among all relevant stakeholders, Regional and Local Authorities, public and private sectors, industry, academia, and civil society.