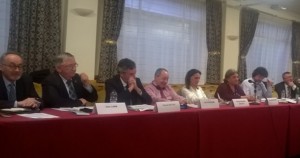 The CPMR, at the initiative of its member region Normandy, is launching a new Task Force that will aim to foster cross-Channel cooperation between France and the UK.

The establishment of the Task Force, to be led by the Normandy region, was agreed at the CPMR’s meeting ‘Opportunities for cooperation in the Channel area post-Brexit?’, on Wednesday 15 November in Cardiff, Wales, which brought together key representatives from UK and French Channel regions.

The event took place in advance of the major CPMR Brexit Conference, held on 16 November in Cardiff, at which 20 regions signed the CPMR’s Cardiff declaration calling for action to address the disproportionate impact of Brexit on Europe’s regions and key sectors, and expressing their commitment to strong cooperation between Europe’s regions after Brexit.

The ‘Opportunities for cooperation in the Channel area post-Brexit? meeting brought together regional representatives, businesses, maritime clusters, universities and tourism agencies from the French regions of Normandy, Brittany and Hauts-de-France, and the UK regions of Norfolk, Southend-on-Sea, Cornwall and Hampshire, to reflect on the potential for future cooperation post-Brexit.

At the meeting, Francois-Xavier Priollaud, Vice-President of Normandy for EU and international affairs, stressed that the Normandy region supported the need to develop cross-Channel cooperation “out of conviction, pragmatism and ambition, so that after Brexit Franco-British cooperation does not just become residual cooperation”.

Vice President of the Brittany region, Forough Salami emphasised the potentially serious impact of Brexit on Brittany, outlined in a Brexit impact study that the region has developed, notably on the longstanding relationships existing between actors from both sides of the Channel, in research and academic cooperation. 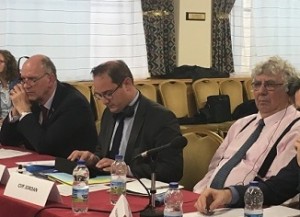 As a result of the meeting, the regions involved agreed on the need for a flexible, pragmatic approach based on a ‘bottom up’ process, to better meet the needs and the expectations of all those involved.

The first official meeting of the new cross-Channel Task force will take place in Normandy, during the first quarter of 2018, where discussions are likely to focus on several opportunities for regional cooperation on topics of common interest, including potential cooperation on trade, tourism, and science and academia, marine renewable energies, fisheries, and new ways to work together after the program Interreg Channel ends.