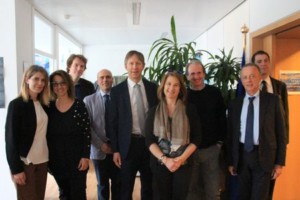 The first meeting of the new AI-NURECC Initiative welcomed external observers from the European Commission’s Directorate-General for Regional and Urban Policy (DG REGIO).

The meeting, which took place at the Brussels offices of the CPMR on 27 April, brought together representatives from the initiative’s partner organisations to kick-off its planning and organisation. It was agreed that the CPMR would chair the Steering Committee.

Mr Halkin gave an overview of the strategic importance of the AI-NURECC project and the Commission’s high expectations for the project in engaging with key stakeholders in the region.

He emphasised the importance of a bottom-up approach to the strategy’s implementation, and the role that AI-NURECC has to play in helping to achieve this goal, bridging the gap between what is delivered by administration and the expectations of stakeholders, in particular regarding the cross-cutting issues of the strategy. He also emphasised the complementarity that AI-NURECC would bring to working with other formal structures in the region.

Also at the meeting, the initiatives project’s provided updates on events planned in the months ahead.

Forum AIC is organising a workshop on sustainable tourism that will focus on cruise industry, services and facilities. The workshop will take place in Ancient Olympia, Greece on 27 June. The workshop will target relevant Adriatic and Ionian stakeholders and actors active in this thematic field.

The AI-NURECC Summer School will be organised in Ancona in September. The CPMR explained that it has also contacted its Albanian member regions to start the organisation of the conference and workshop that will take place in Albania on November 2018. Forum AIC also provided some general information on the workshop that will be organised in Split, Croatia, in October.