The CPMR at COP 21: seven seas, three oceans, one Europe 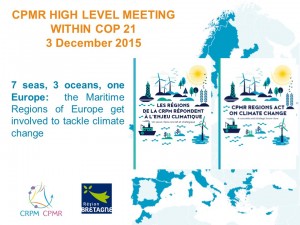 Every maritime region has a front row seat when it comes to observing the initial effects of climate change in its territory. These face the first visible impacts of climate change, have taken steps to face drought, floods, invasive species, have deployed mitigation policies addressing innovation in all sectors of their economy, and they have invented new forms of democracy to encourage people to contribute to the climate protection revolution.

The Conference of Peripheral Maritime Regions (CPMR) was present at the COP21. In the workshop “7 seas, 3 oceans, one Europe: the Maritime Regions of Europe get involved to tackle climate change”, which took place on 3 December 2015, CPMR member-regions presented the wide array of policies already in place. Specifically, Enrico Rossi President of Tuscany (IT), Apostolos Papafotiou, Regional Councillor of the Peloponnese Region (GR), Maina Sage, French MP from French Polynesia (FR) Joakim Larsson President of Västra Götaland (SE), Dominique Ramard, Regional Councillor of Brittany Region (FR), and Rhodri Asby, Deputy Director and Head of Climate Change and Natural Resources Policy at the Welsh Government (UK) gave testimonies addressing both adaptation of their territories to the new climate reality, as well as CO2 emissions reduction from the economic activities within their territories.

The workshop was moderated by Renaud Layadi from Brittany region and chaired by Rogier Van Der Sande, Regional Minister of South-Holland (NL) and Vice-President of the CPMR in charge of Energy and Climate.

Throughout the years, the CPMR has gained valuable competence in the territorial dimension of EU policies as well as in the implementation of those policies at regional level. For the first time this territorial approach is recognised in the global climate agreement of COP21, the landmark “Paris Agreement”. The mobilisation of all levels of governance towards the ambitious target to limit global warming to well below 2 degrees Celsius, with the intent to pursue a 1.5-degree target, is a fundamental necessity. In this respect, the testimonies gathered from our regions that have a thorough knowledge of their own territory are priceless in terms of the knowledge they provide and decisive in terms of how Regions can deliver on grounds of sustainability and long-lasting solutions.

During this COP21 side event, the CPMR distributed the results of a Survey of its member regions based on their experiences regarding climate change. This publication provides a first example of what regions can produce in terms of sustainable solutions when implementing European or International environment policy frameworks at the territorial level.

An open letter of gratitude to all who contributed  to the success of COP21 outcomes and Paris Agreement was issued by  Christiana Figueres, the Executive Secretary of the UN Climate Change Secretariat (UNFCCC).