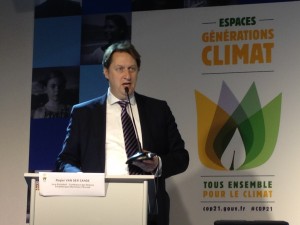 Rogier Van Der Sande is the Regional Minister of Zuid-Holland Province in the Netherlands, and the Vice-President in charge of Energy and Climate of the Conference of Peripheral Maritime Regions (CPMR).

In the framework of the COP21, he represented the CPMR on 2 December, Day of Resilience, at a session organised by the Peruvian government and the Ocean Climate platform within the “Lima-Paris Action Agenda” dedicated to the Ocean and more specifically to “Coastal Risk Management and Adaptation”.

1/ Mr Van Der Sande, have coastal areas already started observing signs of climate change? What is the experience of the CPMR regions?

RVdS: Over the last months, CPMR has collected such experiences through a survey addressed to its member regions on the initial impacts of climate change on coastal territories.

Results have shown that several actions have been undertaken by regional governments not only to adapt to the new reality, but also to mitigate this phenomenon.

Although the link between climate change and the rise in the frequency and intensity of certain natural events has not always been scientifically proven, the experiences collected through this survey are priceless in terms of the knowledge they provide and decisive in terms of the regions’ ability to cope with global warming.

2/ Can you please mention some practical examples of impact on coastal territories that has already been observed?

Talking about coastal erosion, Tuscany Region in Italy has over the past decade, lost 147,000m² of beaches.

The gradual rise in temperatures has various direct environmental, social and economic consequences. As an example, in French Polynesia, it has become more difficult to grow pearls, in particular in the lagoons of Polynesian closed atolls. While in my country, in Southern Holland, the flora and fauna are constantly and gradually changing.

Then, in Hiiumaa (EE), global warming is delaying the formation of sea ice, reducing the availability of the ice roads that connect the island to the mainland.

Finally, the movement of fish, jellyfish and other living marine animals has for instance been observed by other regions, such as Alentejo in Portugal.

3/ In order to adapt to the consequences of climate change, measures have been implemented locally by CPMR regions. Can you please give us some examples?

The first act of regions has been to develop global approaches to adaptation. For instance, the Valencia region in Spain has produced a strategy that includes 100 measures to tackle climate change, with actions specifically targeting adaptation issues. All French regions have introduced a regional climate, air and energy scheme to implement, at local level, objectives that have been defined nationally.

Furthermore, the EU Commissioner in charge of Environment, Maritime Affairs and Fisheries, Karmenu Vella, indicated that the European Union provided €14.5 billion in climate-related financing. The biggest part of this came from European Structural Funds, which are managed by regions. Therefore, we can expect that the majority of EU funding to be used to support adaptation to climate change will come from these funds. Indeed, several regions such as Crete (GR) or the Azores (PT) have included such sections in their Operational Programme.

4/ We know that another priority is the management of flood risks. How are Regions facing this challenge?

Risk prevention plans are already in place in most CPMR regions: Hordaland (NO), Central Macedonia (GR), the Azores (PT) and Réunion (FR) have drafted plans to deal with rivers bursting their banks. The Basque Country (ES) has drafted a provisional hydrographic timetable to prepare for floods after periods of drought. The plan drawn up by the region of Pärnu (EE) includes a guide to the measures required for flooding or rivers in spate and recommendations for building work. Finally, regions such as Aberdeen (UK) or Shkodër (AL) have introduced or updated strategies that comply with the European Floods Directive (Directive No. 2007/60/CE).

5/ What would the message of Regions be following COP21?

The CPMR advocates a clear territorial dimension in climate policies, which would undoubtedly enable more effective tailor-made solutions and ultimately facilitate the implementation on the ground of the post-2020 global climate agreement. The mobilisation of all levels of governance towards meeting this global challenge is a fundamental necessity to any solution. Regions of the CPMR implement a wide array of policies in the fields of renewable energies, smart technologies, transport, financial innovation, social creativity as well as carbon emissions accounting and assessment. All of them subjects which will determine the success of the Paris agreement in the long run.