CPMR seminar on circular economy and the role of the regions 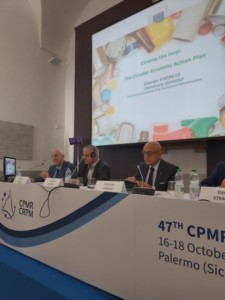 The Conference of Peripheral Maritime Regions (CPMR) organised a seminar on “Circular Economy and the Role of the Regions”, in the frame of its 47th General Assembly taking place in Palermo.

The seminar was hosted by the Region of Sicily and gathered around 80 delegates from CPMR regional authorities from North to South across Europe as well as representatives of associations, universities, private sector actors and European Institutions.

The seminar’s objective was to pool the experiences of the six CPMR Geographical Commissions and gather results in terms of circular economy, in order to prepare a technical document enabling the development of political messages.

The seminar was officially opened by the Vice-President of the Sicilian Region, Mr Gaetano Armao, President of the Insular Regions Intergroup at the Committee of the Regions, who recalled the work led by the CoR on the 8th Environment Programme and its wish to stimulate the European Commission to take initiatives on the circular economy and the environment.

The regions were thus able to share their dynamism and their deep interest in the setting-up of the circular economy on the ground :

The Minister for Gozo, Ms Justyne Carauna highlited the particular situation of islands arguing that  “To reach EU targets, islands need more flexibility and specific regulations in EU funds and state aids to take account of their specific conditions linked to insularity”.  To face the challenges linked to increasing tourism, Gozo has decided to work closely with locals and to apply the principles of the circular economy model (rebuild, reuse and recycle) to the tourism sector. Gozo is a resilient island which aims to translate challenges into opportunities. 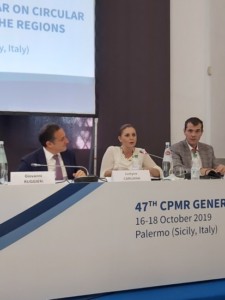 For her part, Mrs Kerstin Brunnström, President of the North Sea Commission, Regional Councillor of Västra Götaland, focused her speech on the actions undertaken in the North Sea regarding the issue of marine litter and on the project “clean coast”. Public raising awareness of the dangers and damages on the fauna and the flora caused by plastic at sea, as well as the need to reduce the use and consumption of plastic, is essential.

Mr Guillaume Cros, Vice-President of the Region of Occitania, Vice-President of the Intermediterranean Commission recalled the very strong commitment of his region to the development of the circular economy on the ground. Mobilisation is essential to change the economic model and move from a predatory logic for the planet to a virtuous one.

Mr Steven Frostdahl, Second Vice-Chair of the Board, Regional Council of Ostrobothnia shared the actions of the region on circular economy highlighting several key aspects necessary for the successful implementation of circular economy at regional level such as : i) The triple helix (firms, public, research and innovation) is key to develop actions ; ii) The future of cohesion policy is key to foster regional actions ; iii) Exchanges of best practices.

The representative of the European Parliament, Mr François Alfonsi, voiced the situation of peripheral maritime and island regions, which face particular challenges when it comes to implementing European legislation, bearing in mind that all Regions are not identical. He highlighted that circular economy and its concept is a very important step forward for such territories and that it requires flexibility. In echo to the words of the Regions, he recalled that the Directives decided in Brussels should be implemented through a place-based approach and adapted on the ground.

Mr Davide Strangis CPMR Executive Director, summed-up that the seminar revealed different approaches, experiences, needs, different regional actions but also similarities between the challenges experienced to address circular economy in all the CPMR Geographical Commissions. All kind of stakeholders are needed to implement properly the concept of circular economy. Solutions need to be adapted to the territorial needs, be flexible and interconnected between them. It is therefore worthy to invest in experimentation at territorial level in our Regions to trigger real innovation, both in technology but also in the funding scheme.

The CPMR will exploit the discussions with a technical document on the state of the art in CPMR regions across Europe, and will elaborate recommendations for advocacy activities.