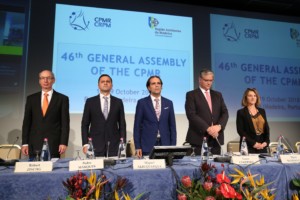 The future of Europe, the EU Budget and post-2020 EU policies impacting on regions were among the key issues discussed at the CPMR General Assembly, held in Funchal, Madeira, on 17-19 October, 2018.

Miguel Albuquerque, President of the Regional Government of Madeira, opened the 46th CPMR General Assembly by thanking the CPMR for its recognition of the issues faced by Europe’s peripheral, maritime and outermost regions. He stressed the need for “cooperation, solidarity & territorial cohesion, supporting economic growth in regions across Europe.”

In his opening speech, CPMR President, Vasco Cordeiro, who was re-elected as President for a further two years, explained the importance of “defending the

interests of the peripheral and maritime regions of Europe that are faced with multifaceted challenges demanding the urgent attention of all current and future policy priorities for Europe” and “respecting subsidiarity and proportionality, as well as supporting multi-level governance and the role of regions in building a positive vision for Europe’s future.”

President Cordeiro added: “This is not business as usual any longer. Europe is at a crossroads and its peripheral maritime regions are the first to feel the uncertainty of climate change, migratory flows, security and border control”.

The General Assembly had the honour of welcoming Carlos Moedas, European Commissioner for Research, Science and Innovation, Robert Zischg, Ambassador of the Embassy of Austria in Lisbon, and Pedro Marques, Portuguese Minister of Planning and Infrastructure to debate the great challenges head for Europe and its peripheral maritime regions. 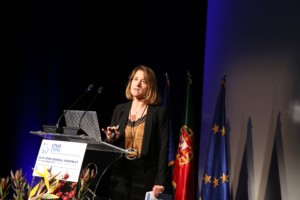 The meeting kicked off with a debate on the role of regions in what could be the future of the European project. The CPMR announced that it is collaborating with the Brittany Region and the Jean Monnet Centre of Excellence in Rennes on a study, led by Jean Monnet researchers, on themes such as European citizenship and the role of regions in the future EU project. This will support the development of the CPMR’s Political Statement on the future of Europe, to be released to coincide with the European Commission’s high-level summit in Sibiu, Romania in May 2019.

Adding extra weight to this debate was the discussion on the EU Budget, which was chaired by President Cordeiro. He explained the CPMR’s concerns that the European Commission’s proposal for the post-2020 EU budget fails to realise the long-term vision required to shape Europe’s future.

These are unprecedented times of change and Europe faces several challenges, including climate change, migration and the security of its citizens. Regions are the first to be affected by these challenges and they must be given sufficient leeway to realise the EU’s ambition on the ground. European objectives, such as the fight against climate change and unemployment, can only be realised by EU policies which are owned at regional level and by citizens.

Therefore, the CPMR will continue to call for an EU budget that recognises the central role of regions in Europe’s future, prioritising stronger territorial, economic and social cohesion, reflecting the importance of accessibility, and acknowledging the potential of the maritime economy. The CPMR General Secretariat will closely monitor the ongoing budget negotiations between the European Parliament and the European Council and will report to Members on key developments of relevance.

Moving on to the debates on specific policies, the session on post-2020 Cohesion policy focused on the state-of-play in the negotiations, particularly the CPMR’s concerns about the European Commission’s proposals to cut the Interreg budget by 12% and eliminate maritime cross border programmes.

Regarding DG REGIO’s proposal, the CPMR supports its balanced package covering all European regions. However, it is worried about cutting Cohesion policy by 10% in real terms, using the policy to serve the European Semester more directly, particularly the European Social Fund (ESF), and undermining the shared management approach by introducing possibilities to transfer funds.

The CPMR’s future activities will be influenced by the legislative activity of the European Parliament, the negotiations in the Council, and the potentially late start of the next programming period. 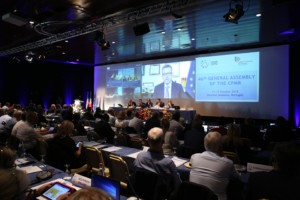 There are positive points in the Commission’s proposals for the EMFF, including the maintenance of a specific fund to finance fisheries and aquaculture, strengthened measures for the outermost regions and support for sustainable blue growth. However, action is needed to increase the share of support under shared management, strengthen the role of the regions in Operational Programmes, and reduce the list of ineligible operations.

Another key issue discussed during the General Assembly was accessibility for regions, particularly the EU’s Connecting Europe Facility (CEF) and the Trans-European Transport Network (TEN-T). Regions stressed the need to review the corridor plans, which date from 2013, taking better account of the peripheral and maritime regions, but also the outermost regions.

As negotiations between the European Parliament and Council continue, the CPMR is calling for a higher co-financing rate and improved governance mechanisms with other European funds. It wants significant support for ports and maritime transport, not only to improve accessibility in peripheral maritime regions, but also to combat road congestion and address climate change.

The CPMR will keeps its member regions informed about the ongoing CEF negotiations and will work closely with regions to develop a policy position on the TEN-T review.

Moving to the session on climate change, the CPMR’s policy position on the European Commission’s Long-Term Strategy for Reducing Emissions w 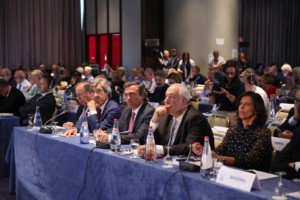 as presented. The CPMR’s key messages include the need to deliver on the ambition of restricting global warming to 1.5°C by 2100 and net zero carbon1 by 2050, and the need to support a multi-level governance approach. It has also stated that territorial cohesion must underpin climate action, and for regions to be part of EU external policy response to climate action.

In terms of migration, this session focused on the CPMR’s crucial activities to strengthen cooperation and partnerships that add value, are innovative and enable more effective migration management and governance. If the potential of regions to help welcome migrants and asylum seekers is to be properly recognised, then a more effective EU migration policy must be developed, taking into account the importance of multi-level governance, including regions in EU decision making. The CPMR presented the issue paper ‘Migration and asylum in EU regions: towards a multilevel governance approach.

Finally, member regions took part in a discussion on the Strategic Plan for the Future of the CPMR. This strategic plan is based on three thematic pillars: Territorial Cohesion, Sustainable maritime and coastal development, and Regions actions to face global challenges. The outcome of these discussions and the CPMR’s strategic plan will be presented to member regions in the coming months with a view to strengthening CPMR’s operational structure and helping to further deliver members’ aspirations in relation to the new European Parliament and Commission.

– Read the Final Declaration from the CPMR General Assembly, held in Funchal, Madeira.

– View all the photos from the CPMR General Assembly

– Visit the Twitter Wall from the General Assembly, featuring tweets from the CPMR, our member regions, regional politicians, MEPS and Commission officials.