Regions must be at heart of rebuilding European project 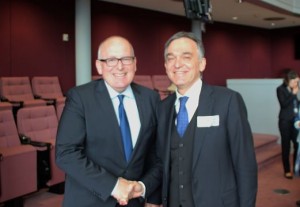 The CPMR has called on the European Commission to put Regions and citizens at the heart of plans to reshape and rebuild the European project, particularly during this period of crisis.

At a meeting on 29 June 2016 with Frans Timmermans, First Vice-President of the European Commission, CPMR Vice President Enrico Rossi, President of the Tuscany Region, said that the European project has been thrown into turmoil by the UK vote to leave, but with the support of Regions the EU can help rebuild a better future.

President Rossi called on the Commission to renew Cohesion Policy after 2020 to cover all European Regions, stressing that this policy needs to be strong so that Regions have the resources they need to unite citizens, fight extremism and encourage social and territorial cohesion.

Pointing to the Juncker Plan, President Rossi, said the CPMR supports the policy, which funds projects of strategic importance across Europe, but he said it should not replace Cohesion Policy, as both policies fulfil different, but complementary, objectives.

During the meeting, which was organised by the European Committee of the Regions (CoR) to discuss the European Commission’s annual work programme for 2017, President Rossi said the Commission must give “real recognition” to the contribution regional authorities and governments bring to the European project.

President Rossi said: “Regions are the link that the EU so desperately needs in these difficult times. Regional authorities are also the pillar of the EU investment policy and act as a bridge between public and private investors. Their value must be recognised and reinforced.”