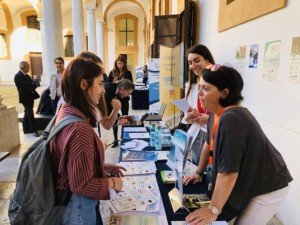 European cooperation projects took pride of place during the 47th CPMR General Assembly, which took place in Palermo, Sicily, on 17-18 October 2019, where a big stand dedicated to cooperation projects involving the CPMR and its members regions, located in front of the plenary room, was set.

The stand was the occasion to promote all the projects in which the CPMR and some of its members are currently involved. CPMR members had the opportunity to learn more about the concrete actions of the projects, exchange project ideas and share experience, and test their knowledge on those projects as well as on a variety of topics, i.e. marine litter, maritime industries, sustainable tourism and Energy Renovation in public buildings.

Several project officers (from CPMR staff or member regions staff) were there to interact with participants and present the main outcomes of some projects, in particular:

On this occasion, the CPMR EU projects Catalogue, which gathers information about all the EU cooperation projects in which the CPMR and/or its member Regions are involved, was released.

Finally, members were invited to answer a quiz to test their knowledge on CPMR Projects. 3 participants received awards.

It is to note that the CPMR has been participating in EU projects since the set-up of European Territorial Cooperation (ETC), as part of Cohesion Policy, in 1990 which was – and is today – very high on its agenda. Its participation in EU programmes and projects has been diversifying as a consequence of the emergence of new programmes, opportunities, member needs and arising policy priorities. 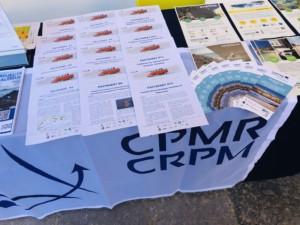 Beyond the benefit at policy and technical level, so far, the CPMR has been involved as participating partner in 64 projects worth overall €40 million for the involved consortia (including many CPMR member regions and territorial stakeholders), of which €11 million were allocated to the CPMR. Over the past few years, the participation of the CPMR in EU cooperation projects has increased significantly. To date, the CPMR is simultaneously involved as full partner in 19 cooperation projects from different programmes including Interreg (Interreg Atlantic Area, Interreg MED, Interreg Europe), DG REGIO grants, H2020, AMIF, Europeaid, Erasmus+ and the EMFF.