The CPMR is due to adopt its Policy Position on post-2020 Cohesion Policy at the Political Bureau meeting on 22 June in Stavanger. The document will be formally presented to the EU-institutions, Member States, regions and stakeholders at the June Cohesion Forum. 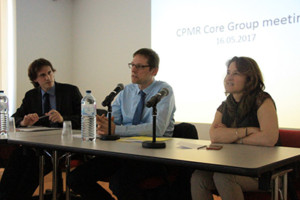 During the meeting, Mr Erik von Breska, Director at the Directorate-General for Regional and Urban Policy, provided an update on European Commission work and reflection on the future Cohesion Policy.

Mr. Von Breska underlined some key issues regarding the post-2020 period: the link between Cohesion Policy and the European economic governance, the need for a simplification of rules, the performance-based approach and the coherence between Cohesion policy and others European funds and instruments.

He informed participants that the next regulation proposal for post-2020 Cohesion Policy will likely to be published in second half of 2018, although the timing will very much be linked to Brexit negotiations.

The CPMR Policy Position on post-2020 Cohesion Policy will be presented at the upcoming CPMR Political Bureau on 22 June in Stavanger. The event will be attended by two special guests who will comment on the Policy Position and share their vision on the future of Cohesion Policy: Mr Marc Lemaître, Director General for Regional and Urban Policy at the European Commission, and Mr Younous Omarjee, Member of the European Parliament and Vice-President of the Regional Development Committee of the European Parliament.

The CPMR Policy Position will go public at the Cohesion Forum on 26 and 27 June in Brussels, during which the CPMR will be represented by the CPMR Vice-President and President of Tuscany, Mr Enrico Rossi.