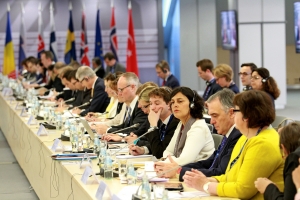 The President of the Tuscany Region, Enrico Rossi represented the Conference of Peripheral Maritime Regions (CPMR) at the Informal Council of Ministers responsible for territorial cohesion and urban affairs which was held in Riga (Latvia) on 10th June 2015.

The Commissioner for Regional Policy, Corina Cretu also participated in the Council where the debates focused on the urban agenda of the EU.

Today in Europe, seven out of ten citizens are living in cities, but many regions of the EU have already implemented the urban dimension in their operational programmes after the decision to devote at least 5 percent of the 2007-2013 ERDF resources to actions for sustainable urban development.

“In Tuscany, in the current programme, the urban dimension corresponds to 6 percent of the total resources, and this figure may also grow,” said Enrico Rossi. “We are totally aware of the importance of metropolitan cities, but it would be wrong to break the unity of the cohesion policies, which must contain in the same framework policies related to metropolitan cities and the rest of the territory, such as peri-urban, rural and internal areas as well as islands,” affirmed Enrico Rossi, speaking to the Member States.

The Vice President of the CPMR also recalled the importance of the Multilevel Governance Charter, launched by the Committee of the Regions and signed by the CPMR and a number of European regions.

Referring to the priorities emerging from the public consultation on the Urban Agenda, namely “Green cities”, “Smart Cities” and “Inclusive cities”, Enrico Rossi recalled that “social inclusion will be a difficult goal to achieve if the current level of unemployment, afflicting 25 million people mostly living in urban area, does not decrease significantly”.

According the CPMR, urban policy should not replace regional policy and regions should remain the main actors in its implementation. Indeed, regional economic development cannot be achieved without the regions being at the core of the policy. Regions play a legitimate role within Cohesion Policy, whether it is regarding Europe 2020 strategy objectives in their territories, or in relation to the design and implementation of operational programmes and, of course, when it comes to governance of the policy.