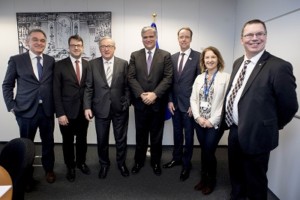 Jean-Claude Juncker at the family picture

The Conference of Peripheral Maritime Regions (CPMR) has urged the President of the European Commission, Jean-Claude Juncker, to cement the place of Cohesion Policy as the main EU strategic investment policy for all European regions and citizens after 2020.

At a meeting in Brussels today, a CPMR delegation composed of several President of Regions discussed with President Juncker its proposals for a modernised Cohesion Policy at the heart of a strengthened future European Union.

The CPMR is calling on the European Commission to take the proposals into account in its upcoming legislative package for the post-2020 EU Budget, to be published by May 2018 as well as in the Cohesion Policy legislative package.

The meeting took place the day after the publication of the roadmap for deepening Europe’s Economic and Monetary Union, which proposes significant changes to the way in which Cohesion Policy funds should support structural reforms.

CPMR President, Vasco Cordeiro, said: “This productive meeting gave us the opportunity to convey to President Juncker how crucial it is to maintain a strong Cohesion policy in the future in order to address the economic, social and territorial disparities across Europe. Cohesion policy must be therefore integrated in a long-term, overarching European strategy for creating growth and jobs from 2020 onwards. It cannot become a mere instrument to support the implementation of structural reforms in the future.”

During the meeting, the CPMR representatives handed President Juncker an Open Letter with five key messages:

1) Cohesion Policy must continue to cover all European regions and citizens for the post-2020 period, while also pursuing the objectives of economic, social and territorial cohesion. The Single market needs Cohesion policy to function effectively, and it fosters cooperation between citizens, regions and countries.

2) The European Social Fund (ESF) must continue to be an integral part of Cohesion Policy to ensure that the EU’s renewed focus on Social Europe can be realised on the ground. The ESF has an essential territorial dimension that mirrors areas of regional competences across Europe.

3) Cohesion policy needs a strong post-2020 financial envelope so that it keeps delivering long-term European public good, as enshrined in the EU Treaties. From reducing regional disparities and providing social and economic balance in times of crisis, to fostering European solidarity and competitiveness, Europe needs a strong Cohesion Policy now more than ever.

5) Cohesion Policy core principles, such as shared management, partnership and multilevel governance, must be maintained. Trust, regional empowerment and smart processes to define priorities for investment at regional level are key to improving the potential of the policy and ensuring growth and jobs to achieve a sustainable development within the EU. 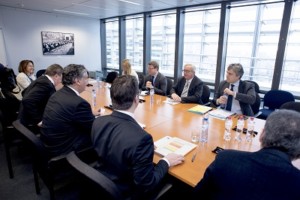 Jean-Claude Juncker at the family picture

President Juncker said: “Europe is taking place in the regions. I am a fan of cohesion policy which must be preserved – always with the input of regions.”

The CPMR General Secretariat has published an analysis which reveals the impact of budgetary cuts suggested in an internal Commission document on a country basis for their Cohesion Policy allocation.

The CPMR analysis also shows the financial consequences of taking out the European Social Fund from Cohesion Policy for each Member State.

The CPMR delegation was made up of: