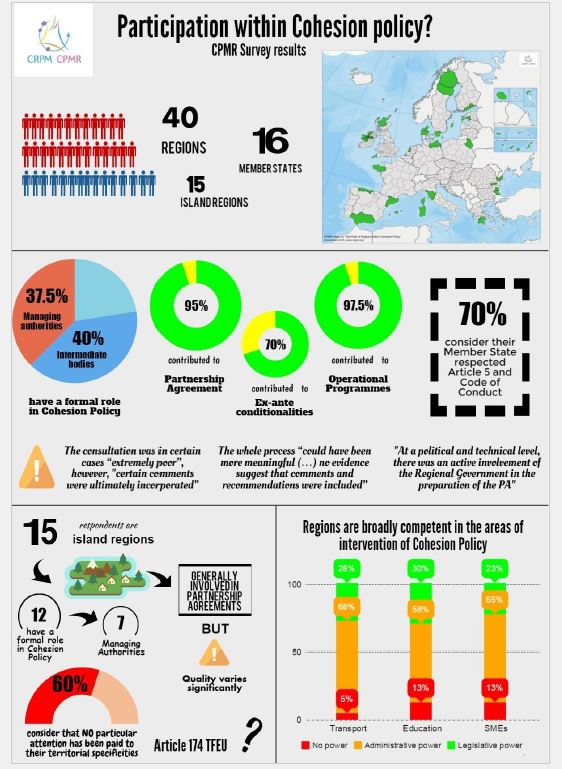 The new provisions on partnership for 2014 – 2020 Cohesion Policy programmes were broadly respected, though the quality of the involvement of regions varied significantly from one Member State to another. Such was the broad conclusion of a study carried out by the CPMR involving 40 different regions in 16 different EU Member States.

The study makes a distinction between respecting the new partnership provisions introduced for the 2014 – 2020 programmes (Article 5 of the Common Provisions Regulation and its Code of Conduct) and the quality of the actual involvement of regions within the operational programmes and the Partnership Agreements. Although the great majority of regions did indeed contribute to the development of Partnership Agreements and Operational Programmes, the perceived levels of influence of regions on shaping programmes varies significantly across regions and Member States.

The island dimension within Cohesion Policy was also examined with 15 Members of the Islands Commission. Although all island regions were included in the process of developing operational programmes, there is little evidence to suggest that all of them were given special treatment on the basis of their status as insular regional authorities at European level.

The study confirms the relatively close fit between the areas of intervention of Cohesion Policy and the competences of regional authorities, therefore legitimising the vital function of Regions in Cohesion Policy.

The conclusions of the study will pave the way for further action from the CPMR to legitimise regions as effective actors to deliver European objectives, in the context of the emerging discussions on the post-2020 EU Budget.