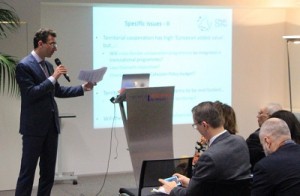 In view of the publication of Commission’s legislative proposal on Cohesion Policy post-2020 on 02 May, the CPMR is stepping up its action to shape the institutional debate.

The CPMR Core Group, gathering representatives from 30 CPMR regions (including two elected members), discussed the issues at stake for the future of Cohesion Policy, on 25 January at the House of the Dutch Provinces in Brussels.

Invited as a guest speaker, Marc Lemaître, Director General for Regional Policy, provided responses to the CPMR’s reflections and concerns about the future of Cohesion Policy.

CPMR Member Regions were highly concerned about the potential risk of Cohesion Policy evolving in the future in an instrument to incentive Member States to carry out structural reforms in the framework of the European Semester.  Member Regions emphasised the importance of preserving the ‘raison d’être’ of Cohesion Policy which is to promote social, economic and territorial development.

The Member Regions also shared their worries about the potential budgetary cut for the Cohesion envelope up to 10%. This would be damaging for Cohesion Policy as it would make it difficult for Member States with ‘more developed regions’ to justify support for Cohesion Policy after 2020 if the aid intensity becomes insignificant. Such a cut would also raise questions about the legitimacy of Cohesion Policy to be a genuine EU ‘investment policy’.

Another point raised by the CPMR Regions was the importance of reinforcing the territorial dimension of Cohesion Policy for post-2020. The policy should reflect the local needs to be able to deliver growth and jobs.

Reacting to the issues raised by the CPMR secretariat and the Member Regions, Marc Lemaître confirmed that there will be a stronger link between Cohesion Policy and the European Semester after 2020.

With regards to the future of European Territorial Cooperation, he mentioned there will be likely some rationalisation of the programmes. He said also that simplification is a top priority of the current Commission. With regards to the future of the European Social Fund, Marc Lemaître stressed there will likely be some rationalisation to reduce overlaps with other funds/programmes.

Michiel Rijsberman, Regional Minister of Flevoland and host of the meeting, underlined the general animosity towards Cohesion Policy and the need for the regional level to engage in an open dialogue with the national level regarding the importance of securing a strong Cohesion Policy for the post-2020 period.

Finally, Marc Lemaître warmly encouraged CPMR Regions to participate in the Commission open consultation “on EU funds in the area of Cohesion” running until 8 March, whose replies will be used by the Commission to draft its proposal on the next MFF.