The result is that 34 regions would change category, of which 11 would outperform the upper category and 23 would fall to the lower category. At the level of the Member States, the regions of southern Europe are the most affected by these declines: 22 of these regions are in Greece, Spain, Italy, Cyprus, and Portugal.

It demonstrates that most regions in Central and Eastern European Countries are showing sustained growth, whilst many Southern EU Member States are falling further behind, particularly Spain and Greece.

Many islands, including all Greek islands and Sardinia, would plunge down a category. The picture is more mixed regarding outermost regions, but Madeira would theoretically drop from a more developed to a less developed region. 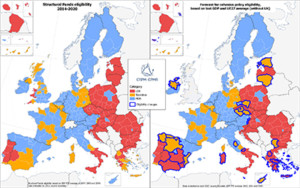 Notably, the map shows that the withdrawal of the UK from the EU has the effect of slightly reducing the European average of the GDP per capita used, but by itself does not have a major impact on the eligibility of the regions in the Cohesion policy. If BREXIT was not taken into account in this simulation only two more regions would outperform the upper category.

CPMR VIDEO:- Projection of the eligibility of the regions in the Cohesion policy, using the latest Regional GDP statistics: